I Learned How To Print My Own Paper

Okay so it's not something I really want to do because I don't believe it is cost effective but when I couldn't find what I was looking for I had to take some desperate measures!

I have been searching high and low for some Graphic 45 French Country so I could make some items for my kitchen to go with the Match Box Project that I made in a class that my friend Linda and I went to back in 2013. The only paper I could find was $60 for the pack and I am not about to pay that much for some dang paper! I did have a deal worked out with someone that I would send them a Foodsaver Meal Saver Vacuum Sealer and they would send me some of the French Country they had but that deal fell through as I never received the paper...and yes I did send the vacuum sealer.

One night at Stamp Club I was talking about looking high and lo for the French Country paper and the lady who runs stamp club said she had some left and would let me buy it. I told her I would just borrow it if she didn't mind and then see if I could scan and print my own. She loves the collection as much as I do and I didn't want to take what was left of hers. I also had a friend scan some of the 8x8 sheets she had and mail those to me. 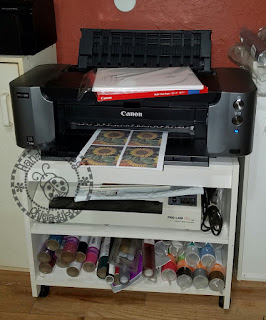 Back in August I had made a trip to Goodwill and hit one of those bargains of the century when I found a brand new Canon Pixma Pro 100, which I discussed in my True Confessions post, and I just knew I would be able to print awesome paper with this thing. I had never used the printer before but my daughter had used it a few times printing some pictures she had scanned that she gathered from her pawpaw and granny. She told me it printed great, I wasn't here at the time she printed them, and that is why I was so hopeful about being able to print the paper I wanted. 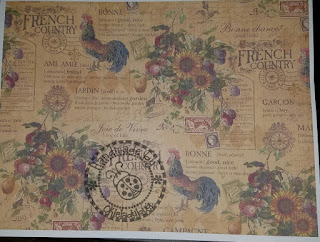 My hope and excitement soon waned into disappointment and frustration as I couldn't get it to print the vibrant colors. While it was mediocre and quite subdued I thought I would just have to make it work. When discussing it on Facebook someone mentioned something about matte photo paper and the color management settings in the computer. I ordered some of the matte photo paper from Amazon, being a prime member does have it's benefits since I actually received it the next day. I played around with my settings in the color management and thought I would try it again. By this time I had already finished one project with the mediocre paper, which I will share later, but there was still another project I wanted to do. 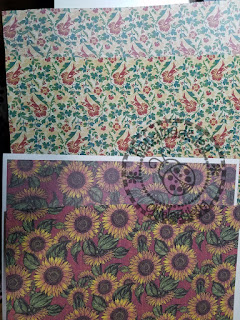 Anxiously I loaded the matte photo paper into the printer and hit the print button for the picture that was on my computer screen. I actually went into the kitchen and piddled around because I didn't want to look at it and be disillusioned while the page finished printing.When I came back into the craftroom I think a squeal of delight escaped my lips as I was elated with what was sitting there! Here you can see for yourself how well it printed once I made the adjustments in the color management, which I have no idea what all I adjusted at the time, and used the matte photo paper. You really can't tell the difference between what I printed and the original paper other than the paper feels a bit different. 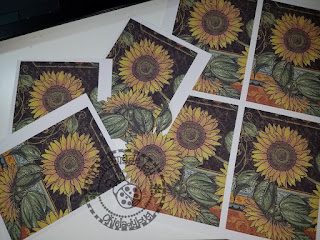 I quickly printed a number of papers to use and even thought about redoing the first project I had completed with the crappy paper yet I didn't want all the ink I had used to go to waste so I decided against it.  I also figured out how to print multiple images on one sheet, the sunflower in the picture is actually from a full 12x12 sheet and I just cropped it to what I wanted to use.

Now let me say that if Graphic 45 finds out about this I will likely be banished from ever using their products again but I tell ya what....we crafters are a desperate kinda breed when it comes to wanting what we want and I justify my actions by thinking it is what they get for discontinuing such a wonderful collection!

The two projects I made with the paper will post in the next few days so be sure to come back and see what I made!
Posted by okieladybug or okie_ladybug

Email ThisBlogThis!Share to TwitterShare to FacebookShare to Pinterest
Labels: french country, Graphic 45, Printing Your Own Paper