I received a message from a friend who let me know that the Holt woman found out about my blog post, which guess she is a fan of mine, and posted a comment on her Facebook page...

WELL WELL WELL!!! I wake up to another hate mail this morning!!! Run over and check this shit out!!! My new blog is not even safe!!!! The Hell with this shit!!!! I cant even come back without drama----> I have never in my life been a part of any cricut board let alone sell the shit!!!! WTH|?!!!!! http://www.okieladybug.com/


Kelli Holt? Who the hell is Kelli Holt? I have never been kelli holt?


I was unable to have someone take a screen shot because she either deactivated her account. I don't know what blog she was referring too but I think she might drive up traffic to my blog and for that I say "THANK YOU ANGELA!!". I always enjoy getting new readers. Okay, I will give her that I do not know for sure that she is indeed Kelli Holt, but that still didn't address the issue of her not sending others their items in a timely fashion, such as my friend Linda and then her putting them on a bully list for being assertive and wanting to know where the product was or give a refund. Notice she only focused on denying she was Kelli Holt, she did not deny any of the rest. 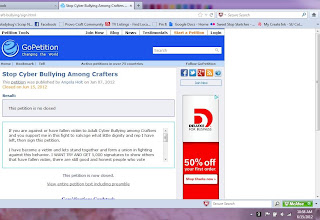 But what I am excited about is that her petition is now closed, or in her words "The petition is no closed" (sic). I am sure she will likely start another one. I did find it interesting that there were many anonymous signatures on the petition, as well as only 143 signatures whereas she told Linda she had almost 3,000 signatures. I never have been a genius at math but I don't think even the best algebraic equation can turn 143 into 3,000. As far as I know only Jesus can do such magnification multiplication and I am quite sure He wouldn't bother with a petition.


**IMPORTANT**
Folks, I have been around for almost 5 years and have interacted with thousands of people via my blog, messageboards and Facebook. If I start saying things that are out of character for me then you might take it with a grain of salt because evidently other people who have tried to expose this woman have been hacked. You guys know me, trust me and know how I say things so if you ever doubt I said something well you just ask me and we will get it straightened out.
Posted by okieladybug or okie_ladybug