So I made this video a few weeks ago but with all the craziness around here I just now got around to editing, publishing and uploading the video! I thought I should show the finished project so I am posting pictures of the card I made with the images I colored.

I used a Cuttlebug folder for the background. I know I should be able to 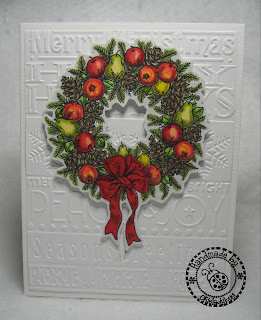 tell you which one it is and I think it is called Seasons Greetings, but I am not positive. I chose to do the card in all white so the wreath would show better. I tried some patterned paper but it just made the wreath kind of washed out.

What I didn't show in the video is that I also shaded around the wreath with Ice Grey 1. I then cut the wreath out and it didn't take near as long as I thought it would. I cut a "donut" of chipboard and then glued the wreath on it so I could pop dot the wreath. On one card I also colored another bow and pop dotted it on top of the one on the wreath but I decided that made it too thick for the mail, but the effect was really nice! 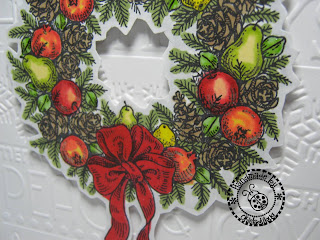 and also on the video.

I wish I knew the name of the stamp I used but it was one I borrowed during Stamp Club and I didn't think to check the name. Next time I will have to see if I can zoom in better *okie thinks she needs to take a video making course*. If you click the picture you can see the detail of the coloring even more. 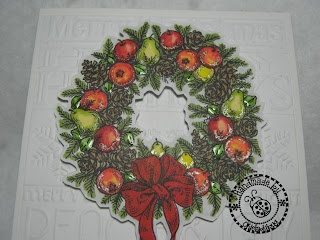 and I don't think any of the photos give it justice. For the glittering I used the Sakura Stardust glitter pen in clear. I wanted to give the fruit a little of the sugared look.