Well I finally made something for myself and I think I really like it! 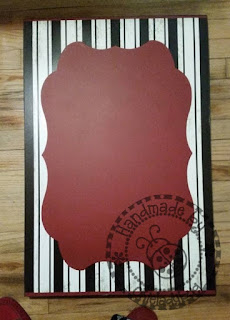 I got this chalkboard a few months ago at Goodwill and kept wanting to do something with it but instead of just drawing with chalk I thought I would do vinyl. I finally got around to it yesterday and decided to use some Cricut Vinyl and do a quote on the chalkboard.

I found a quote but the problem was trying to get it to fit within the bounds of the red. I didn't want it too small because I thought it might look funny but I didn't want to make it too big and have it not fit within the curves. My solution? To put it on the floor and take a picture of it! 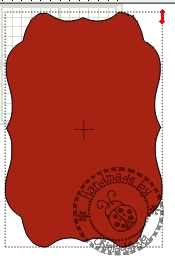 Of course after I did that I needed to load the picture into MTC and do a trace. I didn't need a perfect clean cut image, just the basic shape so I could enlarge it to the same size as the board and then I could find out what size I needed to do the quote. Of course me being me I did end up cleaning up the edges a bit just because I could stand all the jagged edges from the black lines. As you can see in the picture all the lines are not clean and neat though so I didn't go overboard *okie is proud of herself for not wasting hours making clean edges on something that wouldn't be cut*. I was able to measure the original and then set the size on my image making it easier to set the size of my quote. 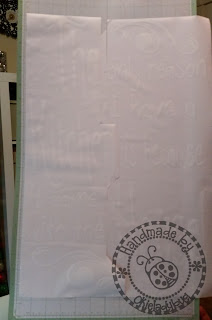 Since the quote ended up being more than 12 inches wide I had to split the quote in two so I could cut it. In order to get it placed correctly for application I put it back on the mat after weeding so I could line it up how I had originally designed it.

I have heard a lot of negative about the Cricut vinyl but I have to say for this project it really worked out great. I did notice that it is a bit more crisp than the Oracle vinyl which makes it more fragile during the weeding process and one of my letters did tear a bit. Had I been doing this for someone else I would have recut the letter but since it was just for me I used it anyway and you really can't tell where it tore now that it is up on the wall. I certainly wouldn't use this vinyl for permanent applications but for wall quotes or items like a chalkboard I think it is fine since it will be easy to remove if I decide to put something different on my chalkboard at a later time. 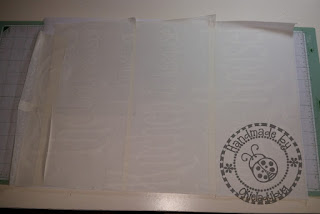 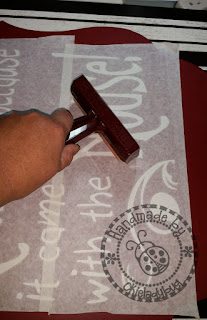 I was worried at first about being able to see through the paper transfer tape and getting the quote lined up correctly but since the background was red it was really easy to see and get it down okay.

Since the Cricut Vinyl is not as tacky as the Orcale or Avery vinyl I am use to working with I used a brayer to help the vinyl adhere to the board better.  For removal I just worked backwards, from top to bottom to remove the tape. This method allowed me to save some of the transfer tape for later use. I didn't get to save it all because I was not paying attention and some of the taped curled and stuck to itself and I didn't feel like fighting it to straighten it out. 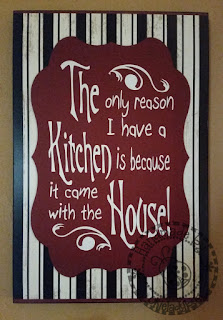 And here is the finished project! I know there are probably some great quotes out there but since this was going in my kitchen and this is pretty much how I feel about kitchens I thought it was perfect! When I showed it to my daughter she cracked up laughing and I think she probably agreed with it.

I do like the idea of the Cricut vinyl being less tacky and leaving me the option to do something else with the board later on. I have to admit it wasn't as horrid as I thought it would be and I think it works great for some applications such as what I mentioned earlier. I will have to try something more detailed later on and see how it works as this was large and there were no problems cutting or weeding the vinyl.

I have several colors of the Cricut vinyl and I might have to try some wall quotes to see how well it works for applying to walls or doors.