I Miss The Cricut Message Board

I am a sentimental person and sometimes it gets the better of me and makes me miss days gone by. Okay not like I'm 80 and missing running through fields of daisies with the sweet smell of fresh cut hay watfing through the air but more like huh, I miss it when I could do such and such. And I guess today is one of those days I just started thinking about something I miss. I know the idea of message boards is going to the way side with Facebook being all the rage but I miss the Cricut Message Board, at least the way it was when I first joined and how it was the first few years, later on it became frustrating and slow and full or Cricut Nazi's as some of us liked to call them.

When I first joined the CMB back in December of 2007 I found it through some of the paperwork that came with my Cricut and I was so excited to have a place to go and read about how to use the machine and what all it could do, even back then the owner's manual was limited in information. Of course, as many know, I didn't bother with learning all the buttons and such on the machine since I went straight to Design Studio and started using my computer with the Cricut. 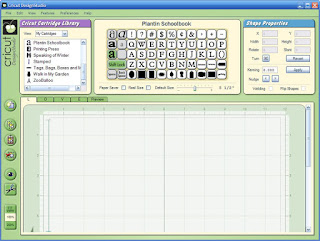 The Design Studio forum was my new home and I didn't venture from that forum for a few months because to be truthful some of the other forums were a bit scary since there were always people going after each other's throats *okie laughs now at the thought*. There were a few of us that spent hours and hours creating and sharing files, answering questions of other members, asking questions of other members, finding out little tricks to get things to work so we could make more images than just what was available on cartridges, and in those days there weren't many cartridges and what cartridges there were would easily cost you $60. We made all kinds of things out of basic shapes and I got rather savvy at manipulating those individual shapes and welding them together to make all sorts of images. Most of us shared what files we made freely and there were a few people who wanted to charge for the ones they made. I'll never forget the saga over the whole cupcake box file and how some lady got a bit snotty about her file so I just made one and posted it for anyone to download for free. I only had a baby Cricut my first few years so it was a challenge to make some things that would work on the 6x12 mat.

As time went on I ventured to some of the other forums and I am so glad I did because I was able to make some wonderful friends and it would be impossible for me to name them all but I'm sure most of you know BFF Carmen came from the CMB, and if ya didn't know then ya do now. There are so many of us that thought of our little CMB world as a little family, well not everyone was family because there a was some absolute cray-cray folks on that board and there was always some kinda drama going on somewhere. Most of the time the posts moved so fast that once you finished reading through one thread the thread that was at the top of the beginning page would already be on page 4.

Now the reason I am even thinking about the CMB is because I was perusing around Facebook and some different groups on there and while there is a lot of information available it is almost impossible to go back and find what you wanted to remember. Nothing stays locked in place and even if it did you would have to remember which group you saw it in and then which post. What was great about the CMB was that you could mark something if it was your favorite or at least save the page or even do a search, and if all that failed you could simply ask in a post "hey does anyone remember where the post was about how to use such and such on such and such?" and several people would answer you.

I know Facebook is a great way to get information, in the crafting world anyway, I would not depend on it for always having truthful news stories, but it just lacks that homey feeling of the CMB where we could connect with each other so much deeper. I guess I am lucky in that I have been able to keep in contact with many of my CMB friends in the Old Cricut Community group and there we still know each other's ups and downs, grieve the sorrows and celebrate the joys of the people we have become close to and think of as friends. I don't mean the typical Facebook friend but the actual true friend. When I think of the members of OCC I think of them as the Grand Dame's of the Cricut world. Some of those members in OCC were there at the birth of the CMB and are to be highly revered because of their knowledge and know how and never ever did any of these ladies have a holier than thou attitude that so many "experts" have today. They were always about helping each other and not cutting the throat of fellow crafter's...my whole opinion on that one needs it's own post.

Facebook can be awesome but I still miss the Cricut Message Board.
Posted by okieladybug or okie_ladybug