I Finally Went To Stamp Club

For those who may not know I attend a stamp club, well at times I attend, that occurs on the first Thursday of the month. I started going probably 5 or 6 years ago after attending a sale that the lady who runs stamp club had and she told me about the stamp club. I haven't gone in quite sometime, mostly because I would forget and then remember after I was already home in my home clothes...okay pajama's *okie wonders who else puts their pj's on right after getting home from work*, and I didn't want to put clothes back on. 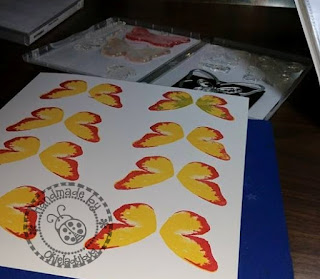 Last Thursday was Stamp Club and I finally made it! I had called my friend Linda a few days before and asked if she wanted to go. I was determined I was going with or without her this time but she did say she would like to go since she hadn't been in ages either. I rarely get anything done at Stamp Club because I am too nosy and always wanting to see what everyone else was doing but this time I was going to persevere and accomplish something! That meant I had to get stuff ready in advance so I stamped my butterflies and had them cut with the framelits a few days before Stamp Club. 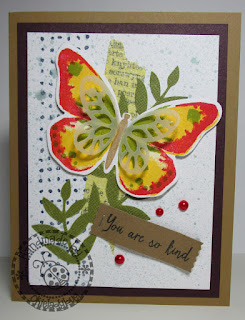 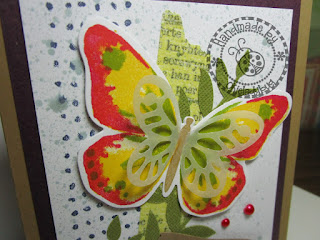 The little butterfly was cut out with translucent sheet which is a lot like vellum but better in my opinion because it prints, cuts and adheres a lot better. I picked it up a few years back at my local bargain store when they got a bunch of crafting supplies in. I was afraid it wouldn't do well in the die but as you can see it came out perfect.

You can also see the spritzes of Glimmer Mist a little better in this picture. I can't ever get a nice clean even light spray with Glimmer Mist but I still love it just the same. 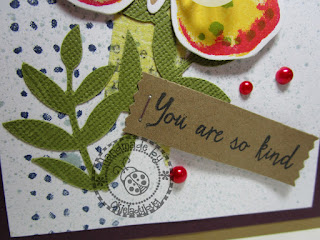 The leaves are some I had left over from a layout I did a few weeks ago. I had cut out extra because I wasn't sure how many I would use and that left me with some extra and I was glad I had them since they worked great on this card.

After stamping the sentiment on Kraft Cardstock I punched it out with the Washi Tape punch. I ordered that punch for the sole reason of using it for sentiments. The Tim Holtz Tiny Attacher was used for adhering it onto the card.

Everyone at Stamp Club loved the card and it is different for me to do something on a white background but I really liked how it turned out. The stamp set was so well liked that it is out on loan right now!
Posted by okieladybug or okie_ladybug