So like I said yesterday I didn't ease into review the Explore One I went in all gung ho and just knew that I would quickly find something this machine can't cut. Since the One is cheaper than the Air I figured it probably doesn't cut as well.

Since I tried super thin at first I thought I would go for something super thick and difficult for my next test. My friend Carmen had found a bunch of adhesive backed fabric sometime ago and I haven't used any because I was afraid my machines would just shred it so it has sat on the shelf for quite awhile just waiting to be used.

I wanted a difficult cut so I decided to cut out a word and not just any word, but a word that is only a little over 1/2" tall and tiny curves in the letters. I was willing to sacrifice a little of the adhesive backed fabric in the name of experimentation and also thinking I certainly had something that wouldn't be able to be cut and it would be worth it! 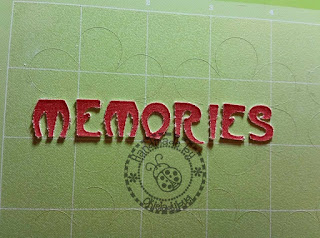 Sadly...I was wrong! My first attempt didn't cut all the way through but once I changed the settings to "denim" I was shocked to see the results. There it was, on the mat, cut perfectly. I suddenly felt defeated. I mean come on now! Who would think a machine would cut this so small and so precisely! I left the letters on the mat so you guys could see the size of the letters and know I am not lying when I said how small and how well the Explore One cut this chit! I might add that I used the regular blade housing and blade as well. I know the deep cut blade was probably suppose to be used but I don't have one of those.

A few years ago when I divorced Cricut I certainly didn't expect a reconciliation much less a reconciliation of this magnitude.  Damn you Provocraft! Damn you for making superior machines that so far cut anything I try! *okie stomps off with arms across her chest and mumbling explicit phrases under her breath*
Posted by okieladybug or okie_ladybug