I know the Explore will cut construction paper beautifully as I used it to cut out a bunch of tiger paws for my youngest Goddaughter and I wondered if the Explore One, which will now be called the E1 because I'm too lazy to keep typing Explore One, would do just as well. Luckily...I guess it was lucky, my Goddaughter needed a few more paws because she got more residents after I got the E1 and I decided to try it out with construction paper. 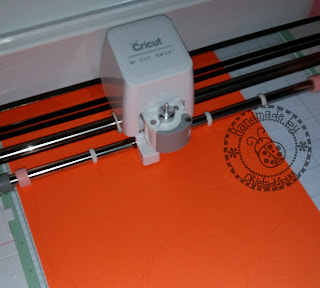 I would like to give a complaint about the E1 at this time. The settings for the paper seem to be a bit off. With the Explore the settings seem to be dead on but with the E1 I had to adjust cutting the construction paper with the light cardstock setting and when cutting light cardstock I had to adjust to the regular cardstock setting. While that might be a huge issue I still see it as an issue. I know how precious our materials are to us and if you are trying to cut something out of your last sheet of paper you want it to be able to cut accurately. For now I would suggest doing some test cuts on different materials to see if your machine is the same or if this is a glitch in my machine. 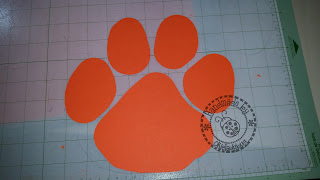 So after getting the paper setting correct the E1 did a fantastic job of cutting out all the tiger paws from the orange construction paper. Even though the cuts were large and not a test on how accurate it cuts small items on construction paper I was still impressed with the accuracy of the machine. 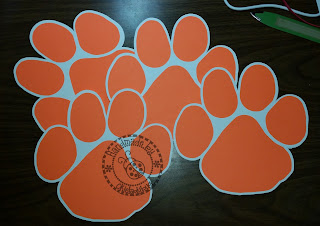 The white paper used was the Georgia Pacific from Walmart that use to be of fantastic quality but they downgraded it a few years ago and my Expressions and even my Pazzles had a hard time cutting it but the E1 cut it like butter. I used the regular cardstock setting to cut it even though I would consider it light cardstock.

My Goddaughter was over the other night so we could cut out more signs, footballs this time. for her residents doors. Evidently this is something WE are going to have to do every month. I swear that girl gets me involved in things I neer would have dreamed of doing! But on the upside she did say all the residents left the name paws on the doors for the whole month.
Posted by okieladybug or okie_ladybug