Birthday Banner - For a Guy

Oh yes this post is about a birthday banner for a man *okie is quite amazed at how fast squirrels tend to distract her*! I've made two in the last month or so and while they were both banners they were quite different.

Today I want to share the one I made for my friend Eric. A few of us who hang out at happy hour *okie suddenly realizes she probably needs to post about that as well and thinks  there is a lot she hasn't shared and wonders how long it will take to catch everyone up with the going on's in okie's life* decided to surprise our friend Eric for his birthday and my task was to make a banner and a cake.

I used 8.5 x 11 kraft carstock for the base of the banner and was able to fit two flags per sheet. I wondered what I wanted to use for the lettering since I really didn't want to waste paper on something that might be thrown away and I came up with using vinyl and in colors I have quite a bit of. This also made it easier for me to laminate the flags since I wanted to try out the laminator a friend sent me. 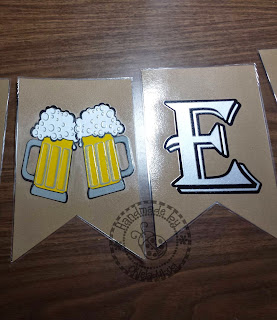 Since happy hour consists of $1 beers I thought it was appropriate to use beer mug images on the banner. Here you can see the images a little better. It was easy to layer the mug images and the letters.

You can also see where I laminated the pieces which I am glad I did since Eric said he was going to keep the banner and hang it in his man cave. I trimmed around the pieces with my guillotine cutter so that went pretty fast. 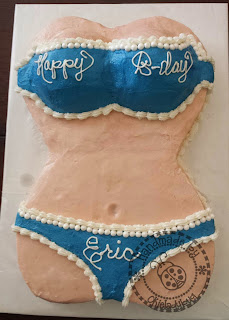 When I was in 8th grade my mom sent me to cake decorating classes at the local Junior college and I completed all the courses they had available and I then earned extra money decorating cakes and since I lived in a rural area I had a pretty steady income of extra money for a 13 year old. My Aunt Betty and her family moved to Oklahoma when I was 15 and she too could decorate cakes and she taught me how to make a bikini cake using heart shaped pans and baking some batter in mugs that have a fairly round bottom.

For Eric I decided a bikini cake was the way to go! I was a bit disappointed in it because it should have been smoother but I have concluded that my little Hamilton Beach hand mixer is no match for making decent decorator buttercream icing. While I was not pleased with the results I will say the cake was a bit hit anyway!

So now y'all can see that I'm a jack of all trades, or is that a jackess? Not to be confused with a jackass of course!
Posted by okieladybug or okie_ladybug