Just want to wish everyone a Happy New Year. I have my ribs in the oven, black-eyed peas in the crockpot and will be making some cabbage a little later. I'm in no hurry to eat right now so those things will be for supper. My daughter has to work so her boyfriend will be taking her food to her later. She is excited to work today because she gets paid time and a half. 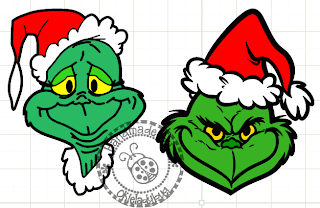 I thought I would post a Grinch file I had made and haven't gotten posted. I will be trying to get some other files posted soon as well. I have been busy making files but just not getting the posted. Hopefully since this is a new year I can start over and start posting more often *okie thinks she really dropped the ball in 2013*.

I did the mean face Grinch first and then thought I probably needed an nice face Grinch as well. I did start designing a layout with the two images but not sure I like it so probably won't be posting it.

Download the Make The Cut file by clicking below: