First off let me say I have been doing some crafting. I had an order for 17 tumblers that I worked on and got done and I will be posting pictures. Secondly, I have been working on some things for the craft show but with competition going on between crafters and craft shows I thought I better not post those items just yet.

Now let me share a recipe, or two actually, with you guys. I had posted on Facebook last week about the cold weather and I decided to make a big pot of chicken and noodles. I don't like store bought noodles and my aunt taught me years ago, over the phone mind you, how to make homemade noodles so that is how I make my chicken and noodles. I also cheated and used my cousin Bruce's suggestion of getting a rotisserie chicken from Walmart and deboning it instead of having to cook my own. 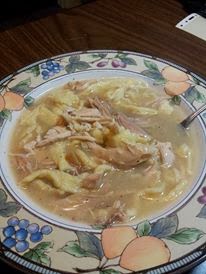 Beat your eggs well and then toss in a handful of flour and work it in with the eggs. Add more flour a little at a time until the dough becomes not quite as thick as pie crust dough. Flour your counter and take about 1/3 of the dough and pat it out on the floured counter very thin, about the thickness of pie crust dough and using a pizza cutter cut your dough into strips and toss into the boiling pot of chicken stock you have going. Repeat the cutting process until all the dough is in the pot.

I really wasn't sure how to write the recipe and that is the best I can do on it because I don't use exact measurements and neither does my Aunt Betty. Sometimes she will put in a few drops of yellow food coloring in the dough if she wants really yellow noodles. I've never done it because I'm too lazy *okie knows that is so the truth*.

I always thicken my broth as well because I like it that way. I just add a little cornstarch to about a cup of broth and mix it well and then add it to the pot. I tell ya, there is nothing like a nice bowl of chicken and noodles on a cold day! In the past I have added onion, celery and carrots to the mix as well but most of the time I just do the chicken and noodles.

Now the second recipe is one I fixed for Thanksgiving Dinner. I use to get broccoli salad at Walmart in the deli and loved it but they changed the deli up so now I will be making my own. I wasn't sure what all was in the recipe and looked up several and then used one but changed slightly for my own taste 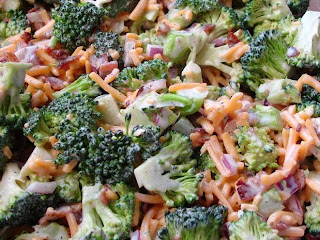 So there are ya two recipes you can try out if you get bored. I myself will not be cooking again until Christmas, and not even then if I can help it! Now I am off to edit pictures of tumblers!
Posted by okieladybug or okie_ladybug

Email ThisBlogThis!Share to TwitterShare to FacebookShare to Pinterest
Labels: Recipe