"The Nut Doesn't Fall Far From The Tree"

I can't remember how many years ago, but it has been a few, my daughter and I were cleaning out the front flower bed and I pulled up a small pecan sapling that had grown next to the house. The little sapling probably wasn't much more than 16" tall at the time. My daughter asked if she could plant it in the front yard and I told her "sure" thinking she would lose interest. Well she did plant the little sapling and I didn't expect it to make it through the week since it had sat out in the yard for a few hours while we finished the flower bed but to my amazement it made it through the week.

The next summer it got so hot that things were dying left and right. I told my daughter "I think your pecan tree has died along with everything else". I actually pretty much let my flowerbeds go at that point because of the heat and lack of rain, no matter how much I watered the plants were just wilting *okie is always amazed how faucet water never seems to work like the fabulous wetness of a good rain in making things grow*. What I didn't know is that my daughter was "sneaking" as she put it, water out to the tree and watering it several times a week. The next spring the little pecan tree started getting buds on it and I was amazed it survived. That is when she told me about her watering it through the drought.

I was looking out my front window this morning and noticed some husks on the tree and walked out to make an inspection. Imagine my delight when I saw healthy pecans in the open husks! Now if you didn't grow up in the south you likely don't know much about pecans and I'm not going to give you a lesson other than when I got one of the pecans I was pleased with the shape and the healthy looking shell. The pecans are not large but they are not as small as the ones in the backyard that are impossible to crack. There is really a whole science about pecans and raising them. My poor sister and husband planted a tree in their backyard hoping to get pecans. I was visiting one day and I looked around at all the trees I could see and I did not see one other pecan tree. I asked her if she was hoping to get pecans and she said "well someday, but we haven't yet". I told her they might have a very long wait because pecans require two or more trees to pollinate. I'm not sure she believed me. I should mention that while I was raised pretty much on a farm my sister is 9 years older and was married and living in the big city when we moved to the farm where I gained my farm life knowledge *okie knows she has forgotten way more than she would care to admit*. 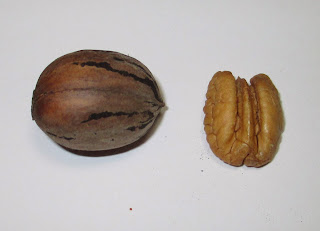 But back to Shiane's pecan tree! Over the last few years I have trimmed some of the branches of the tree to make it easier to mow and I was careful to not remove too many branches. I know Shiane has enjoyed watching the tree grow and year before last she wondered if the ice storm would get it. Some how the little tree has persevered and is now trying to repay us for the times we gave it a little extra attention. Granted, it may have only had 14 pecans on it this year but that is a start and not to mention the little pecans have a great taste!

Now of course ya'll already know how my sense of thinking goes and I had to relate this little pecan tree to life, mine and my daughter's life specifically this time and thought how this pecan tree kind of parallels our relationship. There are very difficult times where a little more attentive handling is needed. There are times where things are good and growth goes along at a relaxing pace. Sometimes a little shaping and pruning is necessary and must be done carefully. Now that my daughter is a young adult and starting to show me some of the determination she has, such as returning to college and putting forth the effort to make it this time, I am recognizing the fruit of my work. Of course, just like the tree, my daughter can be a little nuts but can I truly blame her? After all the old saying goes "The nut doesn't fall far from the tree" *okie smiles knowing she is a more than a little nuts herself*.
Posted by okieladybug or okie_ladybug