Battle of the Toilet Paper

Evidently this battle is one that is fought in many houses across the nation, and possibly the world *okie wonders if all countries have toilet paper holders*, you know the one....NOT PUTTING THE NEW ROLL OF TOILET PAPER ON THE HOLDER! 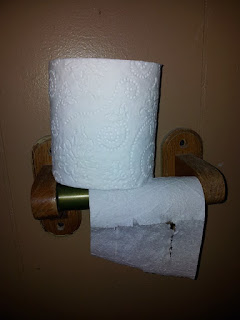 Last week I had posted on Facebook evidence that my daughter does not put the new roll on the holder. This is something that drives me up the wall...how hard is it to take the old roll off and pop the new roll on? Many friends on Facebook chimed in confirming that this travesty does occur in other households.  When I lived here alone *okie closes her eyes for a moment remember the sweet serene times she use to have in her house* there was always toilet paper where it was suppose to be...on the holder!

Of course  the only thing worse than the new roll sitting on the holder is when the roll is empty and there isn't a new roll readily available. To be honest, that does happen in my house as well...in both bathrooms! I swear I think the kids eat the stuff. I told them a few months ago that they were restricted to 5 squares per bathroom visit and then told them "WIPE AND FOLD, WIPE AND FOLD". They just laughed at me *okie gives an exasperating sigh* and I wasn't kidding. 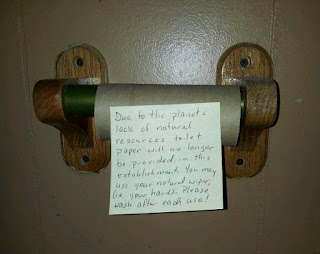 Yesterday morning when I went to the bathroom I used the last of the toilet paper on the roll and instead of putting on a new roll I decided to leave a little note instead. I quickly went into my craftroom, grabbed a Post-It note and wrote the following: "Due to the planets lack of natural resources toilet paper will no longer be provided in this establishment. You may use your natural wiper (i.e. your hand). Please wash after each use!".

I knew this would either get a huge eye roll from my daughter or a huge laugh. I wasn't sure which and since I was leaving to go to the office I thought it best that I wasn't present for her reaction. 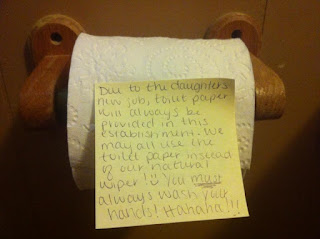 While at lunch with a friend I was going to read her something from my Facebook and I noticed my daughter had tagged me on a post and this was the result! Her note reads: Due to the daughters new job, toilet paper will always be provided in this establishment. We may all use the toilet paper instead of our natural wiper! You must always wash your hands! HA HA HA!!!

Of course I about fell out the booth at Applebee's from laughing at my daughter's response!

Some of you might remember what a rough summer I had with her last year when I had begun to think she had lost her ever loving mind but come to find out it was the effects of the Depo Provera shot she was on, and I think this goes to show how things have changed in a year. Last year my note would have caused her to go into hissy fits and this year she shot back at me with humor. While having her and her boyfriend live here might not always be the ideal situation at least I can say I enjoy my daughter, even if she doesn't always put the toilet paper on the holder!
Posted by okieladybug or okie_ladybug