My cousin Lisa, who lives in Missouri, stopped through on her way home from Texas and I loaded her up on some vinyl and other crafty goodies. I also sent a few things home with her for her daughter Jessica who is also a papercrafter. Lisa bought my E2 from me last year so I am  hoping she will get into doing some great projects now that she is getting settled in to her new home. 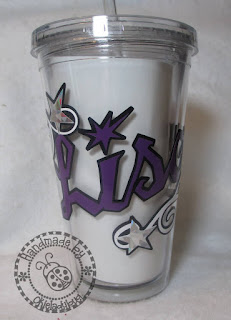 While she was here we were discussing the vinyled tumblers and she said "oh you could make me one of those so I could have one to use at my new job". And...of course I did! I asked what kinda of things she wanted on it and she sells Scentsy so she asked for something that related and we came up with a great tumbler for her! It would have been better if  had some sage green vinyl but hey, I can't have it all can I? HA HA

It's always hard to photograph this dang things so I took a couple of pictures. Here you can see most of her name. The font Sister which is the font like Scentsy uses was used for her name. I can't remember the font I got the swirls from and the stars were from the ones included in the MTC program and I just skewed them to make them odd sizes. 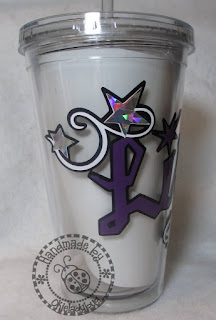 When I was going through vinyl to box up and send home with Lisa I told her "you can't have any of my glitter vinyl because I don't have that much". But I did honor her with using a little of my fancy vinyl on her tumbler. I think she felt a little special...if she didn't she should have! HA HA! 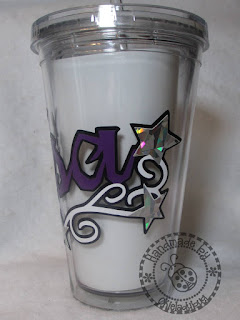 The swirls were a little thin so I did a shadow layer to thicken them up a little. I also broke the original design up and just used pieces from the swirl image so I could just use what I wanted. Have I told you lately how much I LOVE Make The Cut? Well I am telling you now! I swear the more I use that program the more I fall in love!

Lisa was very pleased with her tumbler and I think she will use it with pride!