Karen and I decided we wanted to do photo tray's of our cruise since we had done one last year. We both have bathrooms that are decorated in beach decor and they work well. There were only two white trays when we went to get them and I had to get the one with more slots. Karen said 6 was enough for her to work with...I think she was afraid she might be overwhelmed decorating so many slots and to be truthful I wondered if I could do it. 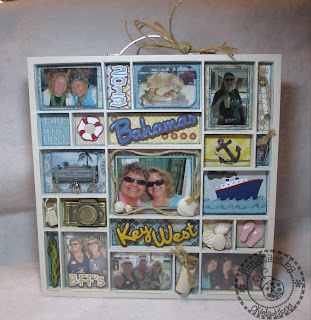 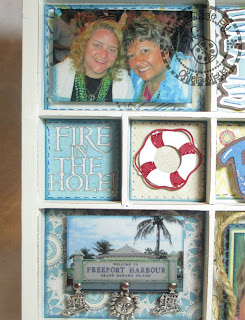 I put acetate over the photos to keep them free from dust and steam since the tray will go in a bathroom.

The "Fire In The Hole" is going to be a memory that Karen and I will have since it was the name of a rum we drank...which was not very good.

I cut the life preserver and added some Stickles on the edges of the red.

The charms on the photo at the bottom came from my friend Carmen and they worked great for the tray. I used brads to attach them to the photo. 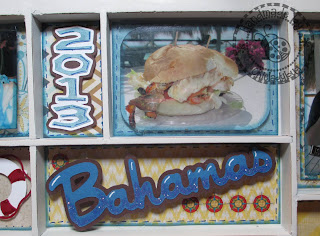 I thought I should put the year in one of the little slots so that as I grow older and my memory fades I can know what year this vacation took place. The picture of the sandwich is a Conch Burger, it was very good! I added a few rub-ons on the paper with "Bahamas" because it seemed to need something so it wasn't so plain. 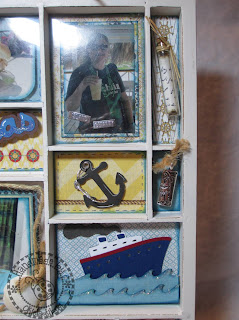 The pack of bottles we got at Michaels had several sizes and I thought one of the skinny bottles would look nice with a little note in it. I wrote some gibberish on a piece of paper, rolled it up and then burned the ends.

The anchor was a die cut I had in my stash. The long charm was another one that my friend Carmen gave me.

I thought I needed a ship in the tray and made it in the colors of Carnival ships. I cut two sets of waves and pop dotted them for dimension. 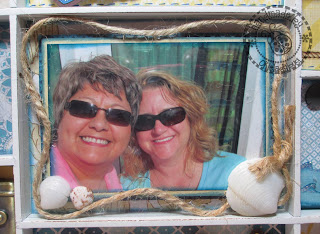 I thought a picture of Karen and I should go in the center of the frame. I added some jute on the acetate piece over the picture and then some shells at the bottom of the picture. I thought it kinda gave the picture an extra little frame besides just the double matting of the photograph. 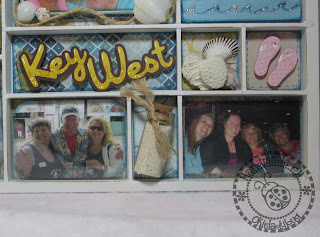 I picked up some shells on the beach and put those in the tray. Oh and the sand in the bottles came from the beach in the Bahamas as well. The flip flops were in my beach stash of embellies. There is a rum bottle rub-on behind Key West but it is a bit hard to see.

I tried to choose photos that were from each location or something special about our trip. 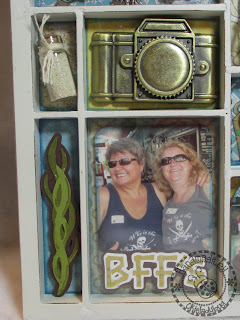 I found the camera embellishment at Michaels in their $1 bin area. I was glad it fit in the tray as I wasn't sure when I got it but figured I could use it for something. I cut the seaweed for the long area simply because I had to have something there and was running out of ideas.

It took me longer than I thought to finish the tray but I think it was because I was watching "Game of Thrones" while doing this and I kept getting distracted...CONSTANTLY!

I think I might try to pick up some more trays when I am in the city if they are on sale and do one or two as prizes for my Christmas party next year. It did feel good to do some crafting again and I think I will try and get some cards done this coming week. I am running low on birthday cards and I need to replenish my stash!
Posted by okieladybug or okie_ladybug