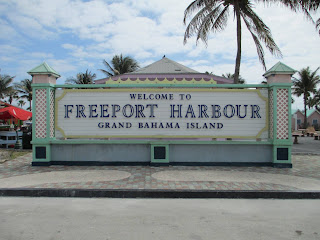 When Karen and I decided to find a cruise while I was going to be in Orlando I went looking at the stops available and told Karen "hey have you ever tried a conch burger" and she said she hadn't. I told her "well let's cruise to the Bahama's and go to this little place in Freeport called Tony Macaroni's. It's got great reviews". And this is how we decided on which cruise to take!

We got into Freeport early on Saturday morning and we were up and ready to find Junkanoo beach. We found a taxi for $14 round trip, which isn't too bad since the cruise line wanted to charge $65 for their excursion to the same place and it included a ride over and a beach chair. We paid $2.50 for our chairs over in front of Tony Macaroni's. 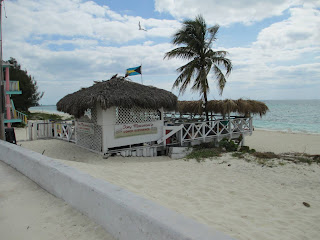 The ride over took about 20 minutes and wasn't a bad ride at all. The folks in the little van were all friendly and we chit chatted the whole way over. When we walked down the beach a bit to Tony Macaroni's Karen said "This is it? You gotta be kiddin me!" and I told her "I told you it was a little shack on the beach!". And yes folks, what you see in the picture is the whole establishment! A man walked up right after we did and evidently he is a regular as he started giving the two women there hugs and talking about how he was sad to leave once again and he told us "this is the best place in all of the Bahamas". We quickly found out that he was probably right! 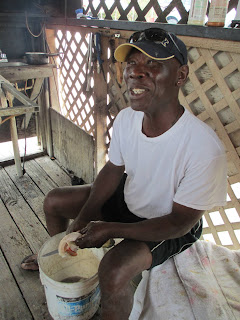 The folks were super friendly there and Tony was nice enough to even show us how he prepares the conch by "Crack It. Stick It. Pull It.". I think Tony was laughing in this picture at Karen getting the heebie jeebies from the slimy looking creature that lived in the shell. He was very patient with our questions and told us step by step on how the process works and how the creature lives in the ocean. He even told us we get a free conch shell with every purchase. Mine will be going in my beach bathroom when I get home! 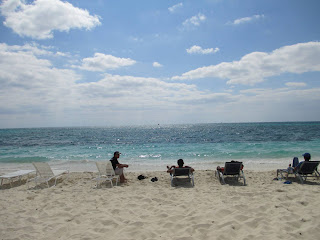 While we were waiting for it to be time for the conch to be prepared we decided to go sit on the beach. They charged us $5 for beach chairs, 2 for 1, in our case *okie so loves a bargain*. There were not as many people in this area of the beach as there was closer down to the Junkanoo beach club. Some young guys tried to get us to play volleyball and we told them we would be right over after they warmed up the net...and NO, we did not go play volleyball. This is the gorgeous view we had in front of Tony's place. 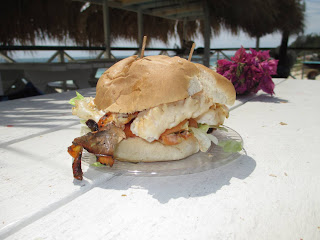 The tables were starting to fill up and we thought we better go make our order. We found a spot next to a really nice couple who have a long distance relationship. The man lived in area and works as a pilot while she lives in Ft. Lauderdale. She said with him being a pilot it helped a lot with them being able to see each other often *okie was sure to tell everyone she is nosy and likes to know about folks to ease their shock at okie's questions about personal lives*. This is a picture of the Conch Burger, Karen and I decided to share in case we didn't like it but we really did like it! It was rather filling so we didn't need to order another. 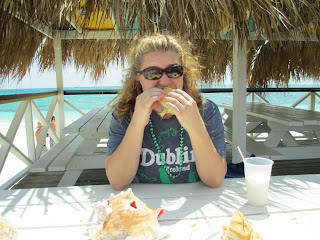 Here is Karen biting into the Conch Burger for the first time. I think we were both surprised at the wonderful taste. Someone asked us if it tasted like chicken and we both said no but weren't sure what it tasted like. It was tender and didn't even really have a fishy taste to it. Some parts were a little chewy but it was still delicious!

After eating we decided we should head back to where the van would pick us up so we could get back to the ship. Once we got back to the port area we ran into Kacie and Ashley and decided to sit and enjoy a drink. Ashley and Kacie told us about their adventures of the day and we got to know each other a bit more before going back aboard. 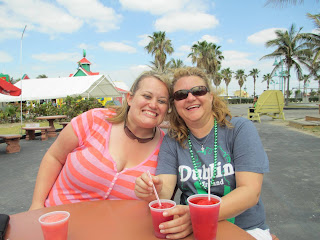 Here is a picture of Ashley and Karen. Notice Karen's St. Patricks Day attire! We had some other beads but gave a few strands away during the day. Some guy wanted to flash us for beads and we told him no...later that night he did flash us, along with doing the worm on the deck of the ship but we still didn't give him any beads. 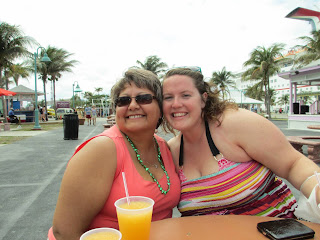 This is a picture of me and Kacie and it was quite a cowinkydink that she works in a similar field as myself! After polishing off our slushy drinks we were ready to get back on the ship and get cleaned up for the St. Patrick's day party that was planned for the night. 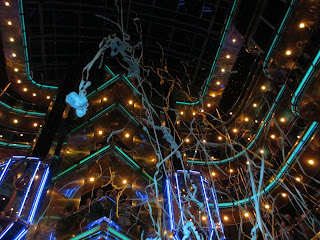 There was a small celebration in the Grand Atrium for St. Patrick's Day before everyone went to the Lido deck for a night of music and dancing. The coolest part of the small celebration was the streamers that fell from high above us. Most of the items they were tossing to the folks were probably left over from a Mardi Gras celebration as it didn't much look like St. Patrick's day items but everyone was trying to catch beads and masks just the same. 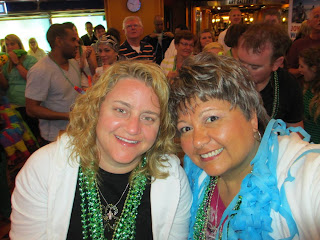 I got covered in the streamers and decided to just go with it and wear them. This is Karen and I before we left for the Lido deck. I have found the one drawback of vacationing with just Karen and I is that we have to take pictures of ourselves...well...ourselves! LOL Although there are always folks around who are willing to snap a shot or two. I think I did more picture taking for other people than I did for myself. 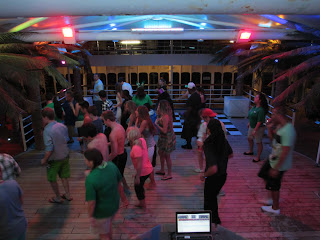 Here is a picture of some of the people dancing on the stage on Lido deck. It does not show the full picture of the masses of people that were on the deck dancing. Everyone was having a great time for sure. Karen and I found a couple from Ohio who were using vaporizers like we had. They said they had smoked for years and started vaping in January and haven't had a cigarette since. Oh and by the way...I am still vaping away!
Posted by okieladybug or okie_ladybug