Our stop in Nassau was so short it was hard to do anything and basically we walked off the ship, went out the port looked down the street, went back through the port thing and went back to the ship....bingo bango done!

In all fairness we didn't wake up until about 9:30 that morning and by the time we got ready, went and ate breakfast and got off the ship it was after 11 and everyone had to be back on the ship by 1:30pm so there wasn't much we could do. 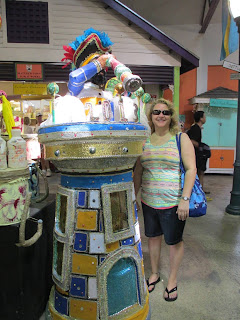 We did find a few things to take our pictures by just so we could have some proof we were there. Karen is standing by some kind of very decorative thing that we have no idea what it is. She did have a picture of me by a big bird looking thing but that picture is on her camera and I don't have her pictures edited yet on my computer.  We are thinking these things are used for parades or something. There were little tables of trinket things in this area so you could get some souvenirs if you liked but we passed as we thought most looked like stuff made in China but had Bahamas or Nassau printed on it. 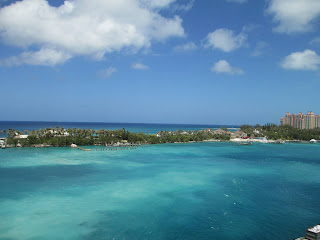 I do have to say the ride out of the port was beautiful and we did stand out on the dock just enjoying the view for awhile before getting on the ship. This picture was taken as we were going out of the port. I believe that big tall building on the right hand side of the picture is the famous Atlantis resort. 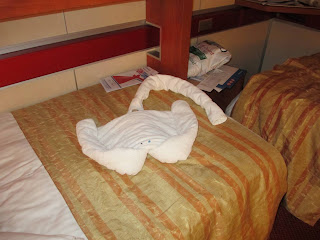 We did enjoy a great comedy show this night and after that we went the rest of the remaining nights to the comedy shows. The Punchliner as it is called featured a comic named Eddie Clark and another, who was our favorite by the name of Chris Wiles. We turned in fairly early this night because Key West was our next stop and we had a Pub Crawl to attend! Here is a picture of our sting ray that our room stewards made for us. We did have great room stewards by the names of Julius, Noorad and Stephanus. Stephanus was quite intrigued with our vaporizers and while we were on the cruise he told us he quit smoking "cold goose", which caused Karen and I to giggle and tell him it was cold turkey. I didn't get to see him before I left and ask him if he was still going cold goose with the smoking.

I will be back home in Oklahoma tonight but I will continue with the posts of the vacation. If you are getting bored then too bad, I can't just stop right now and not finish the vacation posts...it's just how I roll ya know! HA HA HA
Posted by okieladybug or okie_ladybug