I got my Pazzles via UPS yesterday and of course I immediately unpacked it. I also got the different tools - distressing tool, engraving tool, pen tool, etching tool and embossing tool. Of course I havent had time to try those out but will try to get to them eventually. My main concern was getting the Pazzles hooked up and seeing if it worked.

It was no problem getting it out of the box and plugging it in. I installed the software, which I haven't tried either, updated drivers, etc and tried a cut in Make The Cut. IT WAS A FRIKKIN DISASTER! I am not quite sure what I did wrong, other than probably not read all the directions and follow all the guidelines but it was cutting very weirdly and making terrible noises. So in order to fix this problem I promptly took a 2.5 hour nap! HEY! After seeing 33 people I was very mentally exhausted! Of course finding out Walmart messed up where my spare tire goes and me having to go to a junk yard and get the tire out of there and then to the tire shop didn't lessen my mental stress for the day either.

After waking up I was dreading a bit about even trying the Pazzles again and I was on the phone with Carmen talking to her about the issue and she kept asking what I needed to do and trying to give me suggestions...because ya know she is an expert on Pazzles - NOT! Anyway after some frustration and me pushing this button and that button I decided to push the little red button where the blade housing is and the pulled it and then pushed the blade housing back *okie wonders if that was the order or if she could even possibly remember the order she did things since she was pushing everything constantly to get the thing to work*. Finally after that the blade housing lined up right and I was able to get a proper cut...NOT! Guess what? The mat orientation is different so it was in the wrong place *okie gives herself a V-8 smack on the forehead*.

After getting the mat orientation set correctly I first I just cut a simple plus sign and then I thought I would try something a little more difficult and cut a happy birthday image I had in MTC format. Chuck was rather hilarious at telling me I was messing up and he grabbed the manual, put on my reading glasses which I am quite sure almost gave him a headache, and proceeded to try and tell me what I needed to do. I changed the pressure settings and was able to get a nice clean cut. After getting Chuck's approval that I was able to use the machine and him leaving to go play his Xbox and leaving me alone I decided it was time to cut something a little more difficult. 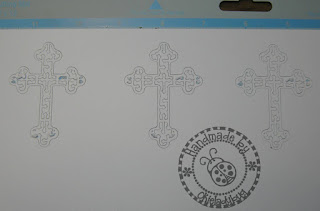 I tried a very intricate cut after a happy birthday cut went well and these were cut at 2.5". I tried, from left to right - speed 5, speed 4 and speed 3. As you can see in the picture speed  3 seemed to do the best but 4 was not far behind. Speed 5 at something this intricate is a definite NO NO! 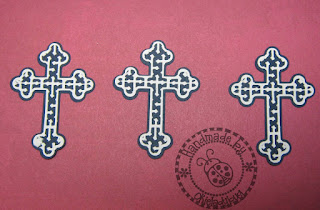 I cut the shadow in a darker color of some very cheap thin cardstock, which did cut beautifully in the Pazzles, so I could show the contrast well.  I am not sure how well the Cricut would cut these at this size but I might have to try it so I can do a side by side comparison between the machines and handling intricate cuts.

I do know the Pazzles is going to take some getting use to but the different pressures are going to be awesome! Carmen was nice enough to look online and find me a cutting guide that will come in handy! I am going to give their software a shot and see if I am able to do anything with it but if not...I always have Make The Cut!!
Posted by okieladybug or okie_ladybug