The World Would Be A Better Place

Yesterday started out really good. I thought the weather was going to be good since it was forecasted to be the hottest day of the week...cooler temperatures in August is always a welcome relief. I headed out to work feeling good and looking forward to seeing my clients at the ICF/MR. Once I arrived I was greeted by the two men who usually are always outside, both telling me "GOOD MORNING SHIRLEY!" and waving. Their bright smiles always make me instantaneously return the smile and give me a lift in spirit even on the worst day. I asked about their weekends and head in to get my group room set up.


When I went go gather up my first group the lady who sees over their lunchroom said she wanted to talk to me. She pulled me aside and told me that one of the residents had been taken to the hospital and they didn't think she would make it. It was easy to see she was trying to keep it together emotionally and I knew I had to hold it together because there was going to be an overflow of emotion soon and being a therapist I would be expected to help others. I found one of my coworkers and let her know what was likely to come so she could be prepared and then sent a message to my Regional Director so she could alert the other therapists that see clients at the facility.

I had my groups as usual, not mentioning the news I heard, and they all seemed to be in good spirits. One group member did mention that someone went to the hospital but he didn't know who it was. Another stated she thought she knew who it was but didn't know what happened. It is not uncommon for a resident to go to the hospital for one reason or another so they were not too upset by the incident. Once I finished my groups I was informed that the resident didn't make it. I knew then it was just a matter of time before the news hit throughout the facility. 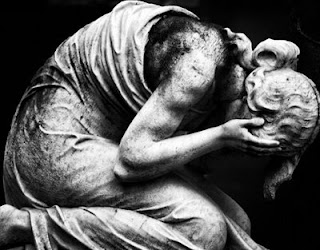 Very rarely have I had to do grief counseling while setting my own grief aside. Usually I am detached from the person who has passed and can focus on the emotions of my client. This time was different. The woman that passed away was a client of mine for a few years and even though I wasn't doing therapy with her anymore I still saw and talked to her everyday I was at the ICF/MR. I had to get to that place in my mind where I didn't think about my own grief. I couldn't allow myself to feel my own emotions while connecting to the emotions of all the residents. If I allowed myself to do that then it would be too overwhelming for me to do my job and after all I am there to do a job and this time my own sense of loss and sadness had to be pushed away in a little box to be opened later. 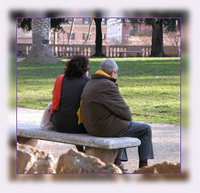 I had to break the news to her best friend because the facility staff wasn't sure how to tell her. I almost cried as I spoke the words and then saw the news sink in and the expression on her face of first bewilderment, then shock and then heart wrenching sadness. I held her as she cried and asked over and over again who was going to be her friend, who was going to go walking with her, who would she talk to, who would she sit outside with...who would love her. I search for the right words to say to this woman who has the mind of a child to make her understand that she wasn't alone. I spent over an hour with her making sure she was going to be okay as she has a history of going into almost catatonic state when she receives bad news. I finally got her to walk outside with me and sit on a bench for a bit and get some fresh air. 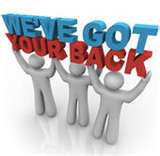 I know I say all the time how amazed I am at the residents of this facility I go to, but today was one of those times where there was such a warmth that went through my body that made me feel rather inadequate as a so called "normal" human being. As the woman and I sat on the bench there was an outpouring of love and support for her by some of the other residents that was an experience that one would have to actually see in order to be able to feel the love that is between this group of people - this group of people that so many in society feel don't know what is going on, that can't think for themselves, that can't feel or understand emotions. They each let her know that she was not alone, they would be there for her, they would go walking with her, listen to music with her, help her get to work and back home, talk with her....love her. She turned to me with tears still glistening in her eyes and a slight smile came on her face and said "they love me. I don't have to be alone". I knew at that moment she would be okay. Of course she will have some difficult times but she knew that she didn't have to fear being alone and while she lost her best friend there are so many others that love and care for her.

I also want to share that when I last went to check on her before they got ready to return to their houses she was standing, holding on to her walker, and pointed to the resident next to her and told me "my friend is going to walk me home" and I told her I was glad she allowing others to help her. I then turned to her friend and said "I hope you lead her better than me because I kinda let her run into a few things earlier" and the grieving woman actually gave a little laugh and said "Yeah she did! (the woman that passed away) did a better job walking me and she was almost blind". At that I couldn't help but laugh and throw my arms around her and give her a big hug which she returned wholeheartedly. I promised her that I would check with her again today and if she wanted to talk I would be there for her.

Not until late at night did I allow myself to feel the grief and have my cry. I knew I needed to get it out because I would need to be recharged for today when I will have to have my groups again and allow them to share their feelings of grief and discuss how to cope. They are the most resilient group of people, always depending on their faith in God and belief that, as one resident put it "God knows when it is time. She is in a better place and she isn't blind anymore and doesn't have to use a walker". If  we could all be so accepting, loving and have such faith the world would be a better place.
Posted by okieladybug or okie_ladybug