Linda and I went to Stamp Club last night and it was the first time we had been in months. Last month it was just too dang hot, and it really was this month as well but we thought we better go or we might be black balled from the club!

When Linda showed up at my house she asked if I had my stuff ready and I looked at her like she had 3 heads as she should have known I didn't have my stuff ready. I didn't even really know what to take so I just started throwing stuff in my bag. I told Linda that I would make a card for the challenge on the Old Cricut Community group, and I actually ended up making two of them.

This was the sketch I gave the group for the challenge this week, thus it is what I based my card on. After I got it done I noticed I forgot the strip at the bottom but Linda said "well it is just a suggestion, it doesn't have to be exact" and that is true so I was happy. 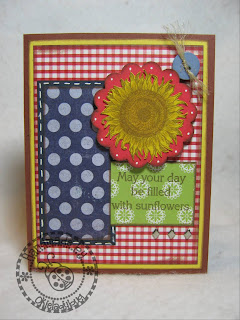 I really don't know what the supplies were that I used since I was just using what was provided. I do know that I stamped the image with Memento Ink since I took my own.

I think double matting really adds a lot to a card or a layout. I had first just cut the read and white gingham and later decided it looked too plain. By adding the yellow mat I think it helped the sunflower pop a little more. I had some difficulty finding papers that I thought went together okay but I believe these work pretty good.

Three small triangle brads were used under the sentiment block and I guess can actually substitute for the strip area in the sketch. 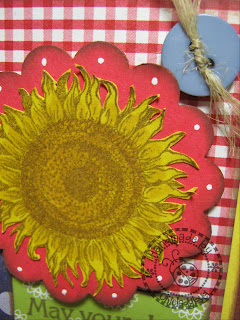 On the sunflower I decided to give it a little more color. I stamped it on yellow paper and then used my Stampin Up markers to add make the petals a little darker in the center of the flower and then used a light brown marker for the flower center. The coloring is very subtle and I did some test colors first before putting marker to the paper.

I cut out the sunflower after I got it stamped and colored and added it to a scallop circle I punched out using the 2 3/8" circle punch made by Stampin Up. The white dots really helped frame the flower and make the circle not look quite so plain.

I didn't have anything to use for the button as a "tie" and one of the ladies had bought a Tim Holtz pack that had a tag with some jute on it. When I said something about needing crochet thread she said "oh maybe this will work" and handed me the jute and it worked perfectly!!

I am hoping to finish up my layout for the layout challenge today and get it posted in the group and on here as well. I have a lot of it done but ya know that dang embellishing can really hold things up for me!
Posted by okieladybug or okie_ladybug