I got some frames from Consumer Crafts sometime ago with the intention of altering them and using them as prizes for my Christmas party. Yesterday I was finally able to get one done! 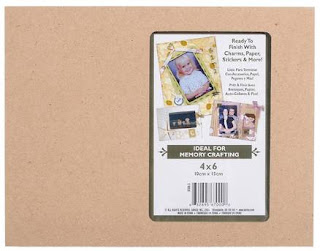 Here is what the frame looks like unaltered. It was simple to work with and I actually just turned it the other way to use it for this particular project. The way the kick stand *okie isn't sure what that thing is called but it does remind her of a kick stand on a bicycle or motorcycle since it keeps the frame from falling over* is on the back you can turn it either way without a problem. I have of the 12x12 size frames as well and they hold 5x7 photos. I will probably working on one or two of those today. 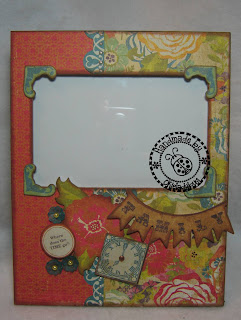 The paper was double sided so I simply cut one piece of paper the size of the overall frame and then made a cut on that paper at 3", flipping the 3" piece over and using it on the left hand side. 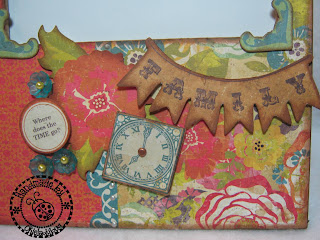 I didn't use my Cricut at all on this project as the collection had some great little extra's that I thought worked well. I did add chipboard under the the punch out elements of the photo corners, banner, clock, flower and circle with words. I pop dotted the banner and the circle. The clock has two layers of chipboard behind it. I glued the flower and the photo corners directly to the frame after covering it with the paper. The border strip was also part of the collection pack. 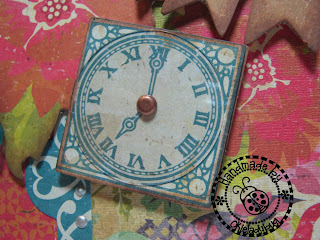 I loved the little clock and wanted to use it for the frame but wasn't sure how to tie it into the banner until I saw the little circle with the words that say "Where does the TIME go?" and then I thought yep that will do it! *okie thinks this is just once again proving what a mind of sheer genius that okie posesses*. I used a 1 3/8" circle punch to punch a piece of clear acetate to fit on top of the clock and then punched a hole, lining it up in the center and added a brad to keep the acetate on and also to make it look like it was part of the clock hands. 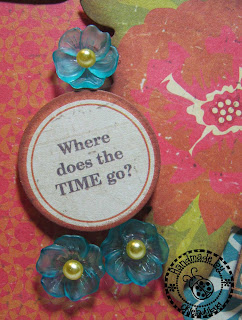 I told you guys about the load of earring jackets and little pearl earrings I got when I posted the altered Paisley Purse, well when I did the frame I got some of the jackets out, which are the flowers and thought I would try alcohol inks on them. They are originally frosted in color. They took the inks fabulously! I cut most of the post off of the yellow pearl earring and then used hot glue to adhere the flower jacket and pearl earring to the frame. I think the little flowers add the little "something special" that we all usually try to find for each project.

Well I am off to work on some more of these suckers and hope to get 2-3 done today, however I might be setting my sights a little high HA HA HA.
Posted by okieladybug or okie_ladybug