I made it to my class reunion. I really wasn't sure what to expect and of course I was ready to go into "shell mode", you know the kinda mode where you figure there might be something hard to hear, deal with or see so you feel like you have a protective bubble around you. I didn't go in on shell mode, was just prepared in case. But ya know what...I didn't need to hit that mode!

My daughter and I got there a little early, actually the first to arrive *okie thinks she needs to write that on her calendar since she is generally fashionably late...then giggles to herself because she calls it "running on Indian time"*. My friend Heath and his wife soon showed up. The last time I saw Heath was at Gary's funeral. He didn't look any different, but then again I think in this electronic age in which we live and can see a lot of folks on Facebook it helps us feel we get to "see" people more than we really do. We went into the cafeteria and started setting things up. My daugther, who can be so wonderful at time...and it is getting to be most of the time these days knew just how those new fangled lunchroom tables worked and was able to get them set up in no time. Heath got the projector ready and started setting up the pictures.

There weren't as many people as we had thought would come but ya know what...I feel we all still had the best time ever. Ed, who started organizing this little shindig, and Heath did a fabulous job! I can't believe that after all these years Heath had the Last Will and Testament that he and I read at our Jr./Sr. Prom. He also had the Senior Spotlight which was a little paper, evidently I was the editor, where all the Seniors were interviewed about what they planned for their futures. Most were rather hilarious.

During the slide show there were quite a few pictures of Gary. I was able to look without tears, I was able to look without heartache. I was able to look with a warm feeling and a slight smile on my face. I had taken many of those pictures since I was on the school newspaper and yearbook staff and did a lot of the photography and darkroom work. I could remember the stories behind not only the pictures of Gary but many of the other pictures. I had no idea that I even still had those memories in my brain *okie thinks to herself...yeah my extraordinarily large brain, but I won't say that*. We all would start talking at a picture that brought the memories rushing back. Of course the majority of our classmates were not there to add their memories but it didn't seem to matter because the ones that were there...well we had enough memories of different events that would fill a book. 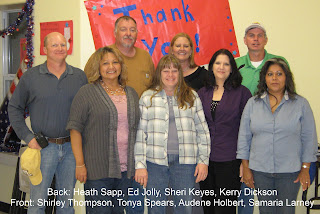 Here is a group picture of the classmates that made it to the reunion. The guy in the green shirt in the back was actually a year younger but like I said we were a small school and a tight knit group.There were a few people that showed up who graduated a year before us. Somehow I missed getting a picture of them.

I also learned something very important last night...about how it doesn't matter how many years have passed, how long it has been since you have seen your "friends" they are always there for you! And that my dears, will be the story for tomorrow!
Posted by okieladybug or okie_ladybug