Okay if ya don't know you know now that I did join the Cricut Circle *of course okie only joined for 3 months, the whole fear of commitment thing even haunts okie in her little crafting world*. I just had to see what it is all about *okie thinks her nosiness will one day get her into some serious trouble*. I have been dying to use the French Manor cart but couldn't ever decide what I wanted to make. I think I mentioned in a post before about having too many choices and then getting nothing done because I can't choose!

Yesterday I designed the card in Design Studio and had to do some welding on it for the frame, other than that it is simple cuts. But I didn't have time to cut it then. I was going to get home tonight and get it done but I decided to color my hair *okie knows her facebook friends have seen the non-gray okie now* before I cut the card. Of course I cut four of the card but only got one completely done tonight *okie wonders if anyone always gets everything done that they plan*. 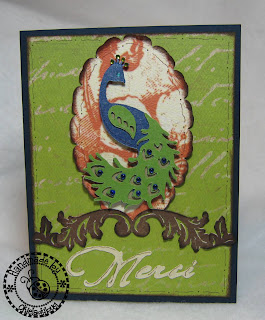 I did hand cut the golden paper in the tail and wing. I didn't want to spend all that time clicking to do the hide contour and it only took me a few seconds. I also had to make a few snips in the flourish at the bottom of the frame.

Okay I might have lied earlier when I said it was simple cuts. Those dang peacocks and scrolls too FOREVER to get done cutting! It might not be so bad if I could just do one, but....I can't.

Here you can see the gems a little better. That I-Rock...well - IT ROCKS! 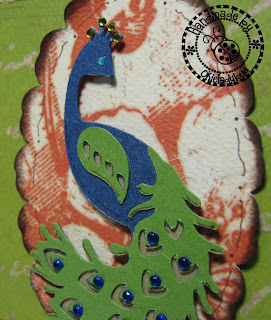 I had been using a Hot Marks tool and I find the I-Rock much more simple to use. You can see where I added gems to his crown, eye and tail. The crown and tail are 2mm and the tail gems are 3mm. You can click the picture if you want to see more detail.


*******UPDATE*********
Someone asked for the .cut file for this card, not sure why I didn't post it before but here it is now! *okie grins*
MERCI PEACOCK
Posted by okieladybug or okie_ladybug