First off I apologize for lying but I really didn't know I was lying at the time...I mean about posting more often. I honestly had best intentions but then I got to where I was really enjoying the swimming pool and having company quite a bit and well......yeah....

So in the last month I have been quite busy. I made a visit to Houston for  week which was a lot of fun. My friend Lori wanted me to come and help her get her scraproom set up and it also allowed me to surprise my friend Carmen and visit her for a week. And when I say surprise, I do mean surprise! I only knew a week before heading down that I was going to go and I never mentioned a thing to Carmen. I did text her daughter to make sure the family didn't have any plans and that Carmen would be home. Let me tell ya a little how that went.

I parked down the street from their house because I know Carmen always looks out the window to see who it is and if she saw my car she would immediately know it was me at the door. I knocked on the door and heard the sounds of boots clicking on tile so I knew it was her husband coming to the door so as soon as he opened the door I did the "SSSSHHHH" sign by holding my index finger up to my lips and whisper "she has no idea!". He was smiling and I heard Carmen say "who is it?" and when I walked around the door she had the most perplexed look on her face and I kept waiting for her to rub her eyes so she could make sure she was seeing what she thought she saw. Of course we immediately hugged and she said "What are you doing here???" and I said "Well you said you were lonely!!!". I had to explain to her that Lori and I had cooked up the scheme because I had posted on Facebook a few weeks earlier how I was sad because Carmen and I hadn't been able to see each other since October and we had gotten use to seeing each other about every 3 months and I wasn't sure when we would get to visit again.

Let me tell ya something folks....ya know it's a true friend when you can show up completely unexpected and say "hey I'm staying a week" and the person welcomes you with open arms!! And yes, I am blessed to have such friends! 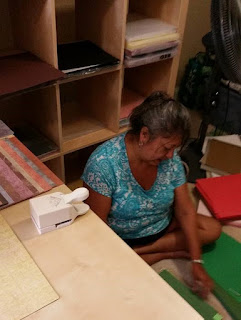 My mission while in Houston really was to help Lori and it worked out that Carmen was able to go as well and while we didn't get it all done we worked hard enough that she would only have a few last things to arrange in her scraproom. I honestly felt like Lori and Carmen did the majority of it as I was organizing paper and embellishments and such, ya know the tedious crap that has to be done. I think this was the only picture taken while I was in Houston and Lori pointed out that we didn't get a group picture this time and we usually always do. I did have some help down on that floor as Lori's little Westie Callaway kept coming in and helping me and by helping I mean standing on the paper and waiting for me to give her back scratches or belly rubs! I would have brought her home with me if I thought I could have gotten away with it. Lori's other dog, a Boxer named Riley, wasn't quite as friendly and barked at Carmen and I anytime we were in the same room with her.

I was able to pick up a few packages of Bazzill cardstock at Tuesday Morning while down there and when I got home I decided it was time for me to update my cardstock since it has been over a year since I even attempted to get it all in order. And speaking of which I will post about that tomorrow.
Posted by okieladybug or okie_ladybug