Iron-On Vinyl and the Cricut

I was finally able to get the video uploaded to Youtube. I was actually going to post it yesterday but when I gave up and went to bed Thursday night it still had like 25 minutes left on the upload so that put it off until today.

I would first like to say I got my vinyl at Signwarehouse.com and I have done business with them before as that is where I order my regular vinyl that I use with my Cricut. They have some other iron-on available other than what I ordered such as patterned, glittered and metallic. I now have a contact there and it will make it easier for me to make my orders. If you are wanting to order you can use the information below and tell em "OKIE SENT ME" and Clay will be more than willing to help you out.

The vinyl seems more expensive but you are getting a larger quanity by buying the rolls of 15" x 5' and if you have someone to split with it would work out even better. I ordered a roll of orange, black and white since that is the colors of the university. Most of my designs have been a good size and so far I have done 7 sweatshirts and 5 tshirts and still have some left left where I might be able to do a few more. For me to go to the T-shirt place here in town and get items customized it likely would have cost me well over $300 as they charge by the design and letter/number.

Here is the video tutorial. I will try to answer any questions that are left in the comments and I might not get to them right away today as I will be at a football game, but will be sure to check the comments when I get home. 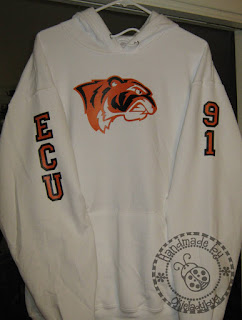 I used Team Spirit for the Tiger head. It is the decal feature and as I showed in the video I used the hide contour feature for the black layer to get the black strips.

Varsity Letter was used for the "ECU" and "91". I did the block in black and then on the outer outline layer I used hide contour feature that gave me just the smaller inside for the orange. I found it easier to layer this way rather than having the orange be the bottom block layer and then the black be the top outline. I didn't have to worry about trying to line up the letters and some orange showing through. I showed in the video how that happens sometimes. 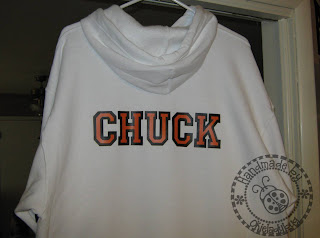 Chuck was very specific about what he wanted on his hoodie. He really liked the tiger head and he wasn't as picky about what font I used but, he was about size and placement for the words and his football number. I did put his name down a little further than I normally would have on a sweatshirt but I wanted to make sure his name would be easily visible when the hood is down.

He is quite proud of his newly decked out hoodie and said "Yep I got a one of a kind" and kept saying everyone is going to be jealous. Chuck is such a kid sometimes! LOL

~Spell Words Backwards and Then Flip

~Blade setting at 2, Pressure on Low (this might vary by machine)

~Use Cotton Setting On Iron - NO STEAM

~Use Hard Surface For Ironing