My daughter wanted me to make a tumbler for her and one of her favorite colors is coral, that's a really hot color these days. The only problem was that I didn't have any coral glitter and hadn't seen the color at Hobby Lobby or Walmart so my resourceful self set out to make my own coral glitter!

I mixed up some Buttercup Yellow glitter from Hobby Lobby and then some Cherry Blossom from Walmart and added a little white glitter in the mix. I just kept adding the colors and mixing until I got a color I liked. The picture really makes it seem more like orange but in person it's a coral color. 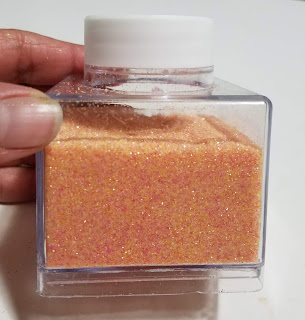 Once my daughter told me she wanted a dream catcher on the tumbler I had to find something that I thought would match up nicely and I found the quote of "let your dreams be bigger than your fears" and it worked out great! I used Cricut Printable Vinyl and the print then cut feature with the Cricut Maker. It was my first time ever using printable vinyl and I really liked how it turned out. For the words I used regular vinyl and there were a few little bumps in the lettering but my daughter won't mind and if she does then she can put the dang thing where the...well, we will just say she will like it! 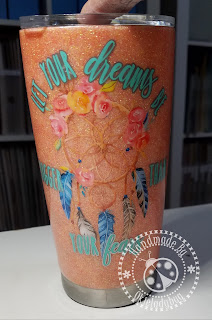 I'll be doing another one of these soon and used Water Slide Paper for the next one and found that was a lot easier to work with than using regular vinyl. I'll post it when I finish it up...hopefully within the next six months or so! HA HA HA