First off let me apologize for not being here for a few months. I am alive and well. I have done some crafting but I've been lazy about getting things posted. I actually might end up losing this dang thing if I can't figure out how to update my information through Google and it would seem I might need to get some technical help to figure it out. It really shouldn't be that hard to update information but it keeps taking me to different links and I don't know what hoops to jump through. Okay enough of that...

I want to share a little trick I learned this morning while working on a banner. I wanted to laminate the banner so it can be used year after year. I had told my friend Andrea I would make her a 4th of July banner last year but I got busy with other things and didn't get it done and since I'm on-call this weekend and can't really go anywhere I decided to work on the banner. 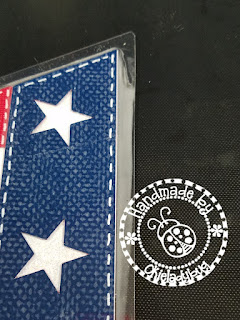 I'll have to post the finished product later since I still have to put it together but I was laminating this morning and ran into a problem of the laminating sheets not adhering all the way leaving me with gaps in some places and also nasty milky looking residue along some edges and that just wouldn't do since I want the banner to be waterproof but also look nice.

As you can see in the picture it was rather nasty looking and I believe the problem was due to the thickness of my banner pieces since I had 3 layers of cardstock on some of the pieces. 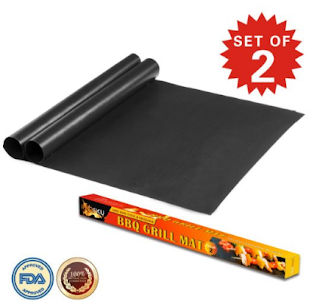 I ran a piece through the laminator again but it didn't help any. I thought about maybe using my iron but I thought there might be an easier and less messy way and that is when using my heat gun popped into my head *okie still thinks she is a genius at times*. I wanted to protect my craft table so I grabbed one of the BBQ mats I had gotten at Zipp Outlet months ago. Quick note on these, they sell for around $10 for 2 on Amazon and work just as well as the craft mats that sell for $10 for 1 in craftstores. Also these are a little thicker than the craft mats and they clean up great. I got mine for $1.97 at the outlet store and I actually bought a number of them to share with crafty friends. 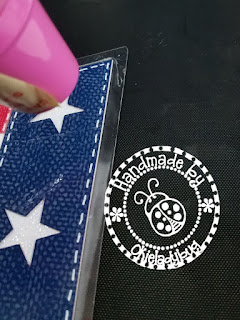 The heat gun worked great for heating the "glue" up and I worked in small areas at a time. You don't want to hold it too long in one area or it will start to melt the lamination sheet. If you do heat embossing you understand how you need to move the gun back and forth a bit and this is the method I did for the lamination sheet. As you can see the milkiness goes away as the glue is heated and I was really excited about the cleaner looking edge but I did want to make sure it was going to stick together and I had an idea for that as well. 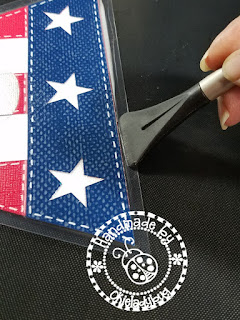 In order to get the lamination sheet to stick together I used my rub on tool, the one I have was made by Basic Grey but I'm sure there is something else you can use since BG is no longer in the paper crafting busines, to go along the edge after the milkiness disappeared. As I mentioned earlier I worked in small areas so I didn't over heat the lamination sheets and also so I would have time to press the sheet together before it cooled down too much.

I am really thrilled with knowing now that I can laminate multiple layers of cardstock and still get a nice clean edge around the paper. The laminating sheets I was using are 5 mil thick, which is pretty thick, and I might not have had this problem had I used thinner laminating sheets but I want this sucker to be pretty sturdy. Also I got a good deal on the laminating sheets, $3.97 for a box of 100, at Zipp Outlet and since I have two boxes I figured I might as well use some of them.

Oh and since someone will ask about Zipp Outlet I will tell you that it is only in Oklahoma in a few towns here and I use to love the store but now it seems all they get in are chips and shoes, neither of which I need!

I'll try and get a few other projects I've done ready to post in the next few days.
Posted by okieladybug or okie_ladybug

Email ThisBlogThis!Share to TwitterShare to FacebookShare to Pinterest
Labels: lamination, Tips and Tricks