Did Some Crafting! Double Wall Tumblers

I decided to take a break from all the work of the real world and do some crafting this weekend. I have been working on some designs for T-shirts so we can get geared up for football season. Luckily this year, thanks to a very generous fan of my work, I will have a heat press to make the T-shirts and it will make it go a lot faster! 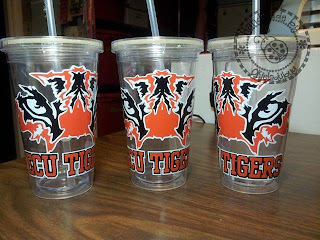 Since I couldn't do T-shirts I decided to get some tumblers made instead. The was able to get a trace of some really cool tiger eyes and thought they might look good on some tumblers. I really like how they turned out. It's been awhile since I have done any layered vinyl and I had to remember to start with the top layer and work my way down. It just makes it easier. I did get four of these made. My daughter said she is going to try and sell them for me. 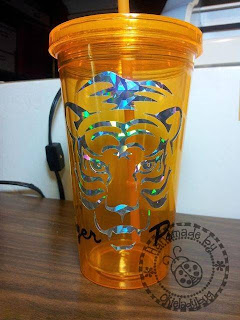 This was the second tumbler I did and I thought the tiger face trace I did would be great with holographic vinyl, and it is but let me tell you it was a P to the I to the T to the A! I have tried working with metallic vinyl before and evidently I forgot what it was like or I wouldn't have tried it this time. Lucky I had a big enough scrap to go back and cut a few of the pieces again. At the bottom the cup says "Tiger Pride". This one will be a one of a kind as far as the holographic design goes.

On the last tumbler I decided to try the tiger face again but this time with some glitter vinyl and put it on a shadow. I also made the Tiger Pride out of the Yearbook Solid font and curved the words on the side. There wasn't enough room at the top and bottom but when I get ready to use it on a T-shirt I will do the words at the top and bottom. I have some holographic HTV ordered from Signwarehouse.com that they have on CLEARANCE right now and I think it will look awesome on a T-shirt.

I still probably won't be posting much for awhile since I am super busy with school starting and having a lot of extra work to do. Hopefully I will be able to start crafting regularly again!
Posted by okieladybug or okie_ladybug