My neighbor Naomi needed an anniversary card for her nephew and I had seen pears used and wanted to use one. Of course deciding which one I would use was quite a chore, there were so many to choose from and so little time! *okie loves sounding overly dramatic* I finally went with one from the Preserves cartridge.

Here is the PERFECT PEAR card. The cut file is set to cut 4 at a time and requires 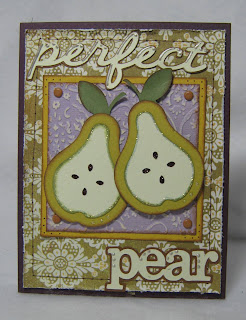 Due to one of the pears being flipped it is important line up the layers before adhering permanently. I just stacked mine after I got them done so I wouldn't get them mixed up.

Here is a close up so you can see some of the detail. 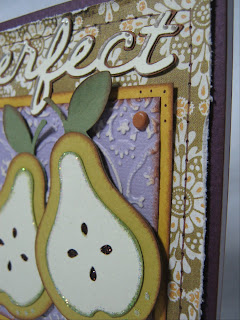 When I sand cardstock that I have embossed with the Cuttlebug I leave the cardstock on the folder while sanding to help the cardstock keep it's texture. If I don't I end up smashing the design a bit *okie does not like smashed designs*.

I measured 3/8" from the edge and used the rolling paper piercer and then added the stitch marks with the Stampin Up marker *okie is still a bit upset about her broken sewing machine...but that is another story*. I only used the Liquid Pearls on the lettering and think it gave a desirable effect *okie laughs at herself for trying to sound magaziny or something*.

I used the Diamond Stickles on the edge of the pear center and then to add a few dots at the bottom. I used Cinnamon Stickles where the seeds are cut.
Posted by okieladybug or okie_ladybug