OH BELLE! A gal after my own heart!

You guys almost didn't get a card today! I was having a bit of a problem with a headache last night and then realized I hadn't taken my medication for the day! *okie would give herself a V-8 smack on the forehead but doesn't want her headache to come back*. 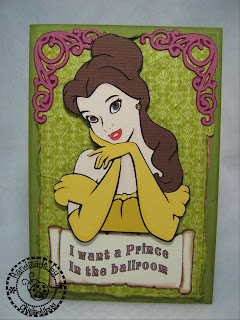 but just shrugs and gives up*. Of course since it is Belle it wouldn't be right without mentioning the beast!

This card also measures 4.25 x 6.25 inches. The background paper is Stampin Up as is the base card. The corners are with Prism and they were done with the Heritage cartridge. The scroll for the sentiment on the front was with Heritage also.

I used Storybook font in MS word to 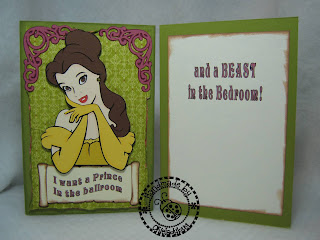 
For the mat of the card I crumpled and then smoothed it out a little before applying to the card base. I curl 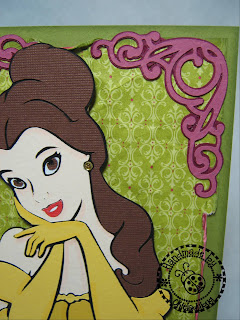 ed the edges up a little also and since the paper was double sided it gives a nice little effect of the pink paper on the back side.

Oh and I did use Cat Eye chalk ink on the edges *okie figures everyone knows that but thinks she should mention it just the same*.