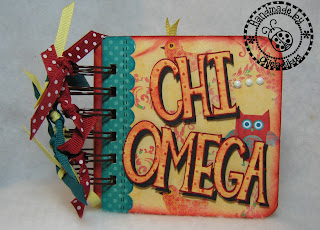 ittle album for her big sis and her twin. And while I was at it I made one for my daughter also. She hasn't given them the little albums yet so I don't know if they like them or not.

The albums are 4x4 inches. I used my bind it all to put them together. The carts I used are Hoot N Holler, Stamping, Graphically Speaking and George.

I made little templates that can be removed and used to cut their pictures and then place in the album. I thought it would make it easier for the girls and in case they are not scrappers they would be less worried about messing something up. 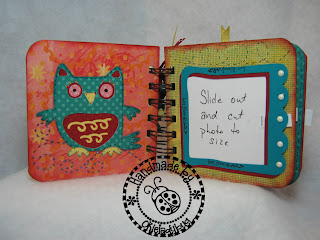 Since their mascot is an owl I did use a few images from Hoot N Holler. I didn't even want this cartridge until my daughter pledged and I found out it is used a lot for her sorority.

I did hand doodling on almost every page. Ya'll know doodling is one of my addictions!

Some Stickles were added to the hand doodled flourish on the first page with the owl. Gotta love the bling of Stickles! 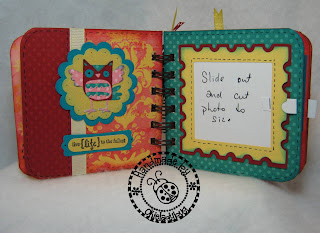 I was going to just put places for pictures on every page but decided on decorating some of the pages. Most of the areas for pictures are at least 2.5".

I used scallop circle punches to frame the owl on this page. The sentiment is with the Word Window and Modern Label punches. 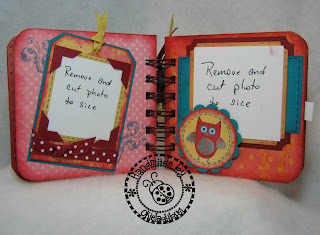 I thought the tag would make an interesting frame for a picture. Tags are always so nice to jazz up a little. I used a flourish stamp to add to the pink polka dot background paper.

The owl is punched from the patterned paper that made me even think of doing this project. Some stickles were added to his wings and tummy.

I used the ticket corner punch on the photo mats. 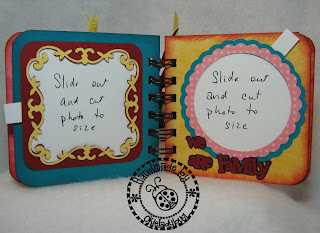 The colors for the sorority are Cardinal and Straw. The paper that made me even think about this project had those colors and were accented with teal and pink so that is where I came up with the color combo.

I didn't want to over decorate every page so these two pages are rather simple. I did add the we are family since a sorority is much like a family and I thought the girls would appreciate that. 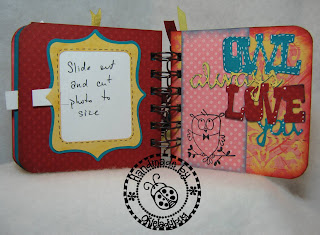 The little owl on the last page is an Inkadinkado stamp and I thought he went great with the sentiment cut from Hoot N Holler.

I wish I knew if the girls liked the albums but since my daughter seems to forget to give them to them I may never know. I told her to bring them back home and I would just sell them on eBay if she was ashamed of the little albums.
Posted by okieladybug or okie_ladybug