I Swarmed with some Cricuteers!

Yesterday was the Swarm in Norman Oklahoma. My friend Linda, aka LGuild, and I went up for the day to swarm with some gals from the Cricut message board. I made sure I took my camera and then guess what.......I didn't take one picture! But thanks to Facebook I was able to swipe a few! Linda and I were table mates with Robin and Renee and we had the best time with them! I hope I get them again at the next swarm!

Here is a group picture of us, and then one of me where I was the first to get a layout done. Of course with the aid of layout kits it sure makes it a lot easier. 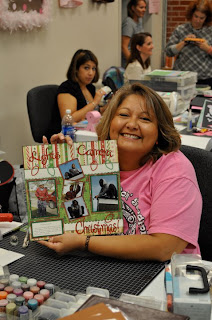 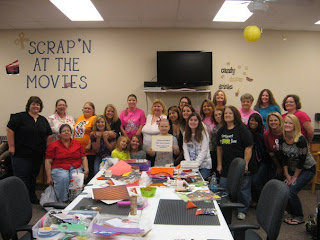 I was able to get 3 one page layouts done and 1 double page layout done. And here you guys thought I was just a card maker! *okie cracks up laughin*


Here are close up pictures of the layout I am holding in the picture.

I used 2 patterned papers and some white cardstock for 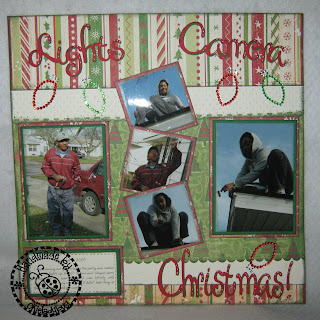 the base of the layout. The patterned paper came from the same DCWV Christmas stack that I have been using for a few years now. I tell ya those 180 sheet stacks last a LONG time!

The gem lights are some I got on clearance for $1 and if I could remember where I would tell you! LOL

I generally like to get a lot of pictures on a layout and I think the one I used for this one was able to show the story of my daughter and her dad putting up my Christmas lights. My daughter is a bit of a clown and gave me a Spiderman pose that was just too good not to use!

Here is a close up of the title at the top. I used a font from Lyrical Letters. 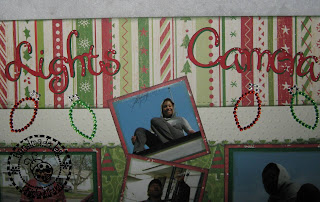 I love the fonts on that cartridge but they don't have shadows *okie so loves her shadow layers* so I have to make my own by cutting two and then off setting the letters.

You can see a little better in this picture that shows where I ran the white through the Cuttlebug using the Swiss Dots folder and then punched with a scallop punch. Ink? Of course you see inking! Come on you guys know by now that is a compulsive behavior for me! 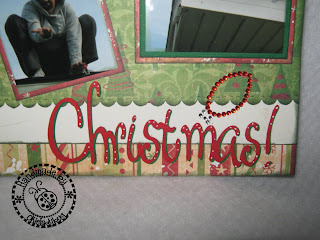 well. You guys know I love bling and I remembered I had these bling stickers when I was putting my layout kit together.

You can also see where I used a scallop punch on the green patterned paper and also added a little faux stitching.

Oh yes and a few little doodle dots on the letters, ya know I just can't resist!

What do you mean what about the other layouts? Of course I am going to show them. But not yet. Not yet! *okie cracks up laughin at herself for using a line from one of her favorite movies...Gladiator* I will be showing them over the next few days so be sure to come back if you would like to see them!
Posted by okieladybug or okie_ladybug