Is none other than Cinderella!

To be honest I don't think I ever had a favorite Disney Princess and even further honest I always thought they were a little hokey with all the honey sweetness in their lives. I do believe I like them a little better now though. Now that they are more real and got down and dirty! *okie cracks up laughin*

So for Cinderella I kept trying to think of something for the sentiment. I was on the 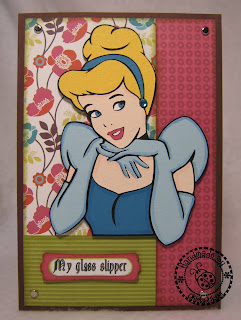 phone with my friend Linda, aka LGuild, and she is the one that came up with the sentiment. She told me I had to give her credit or she would smear my good name through the mud on the Cricut message board *okie has no idea why people think okie picks on Linda when it is totally the other way around*.

Of pattern pink paper is SEI and is double sided with the flowers. The green is a bit of scrap I had of some Stampin Up. You maybe not be able to see unless you click on the pictures, but the pink flower paper has bits of silver in it and that is why I chose to go with silver brads on the card.

I used the Stampin Up word window and modern label punches for the sentiment on the front.

I did pop dot Cinderella and the sentiment.


I didn't do a lot of embellishing because I was just too tired when I put the card together. 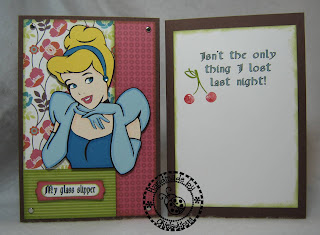 But I think the use of 3 different patterns of papers does help with dressing up the card without adding other embellishment.

For the inside I stamped some cherries next to the sentiment *okie starts to explain the use of cherries but then decides she will leave it up to the imagination of others*. The cherry stamp is from Stampin Up Tart and Tangy.

Well this winds down the Naughty Princess series! I hope you guys enjoyed it as much as I enjoyed showing it to you!