So after a little hiatus from the Naughty Princess cards I am back to finish the series! For today we have Ariel who lives under the sea! 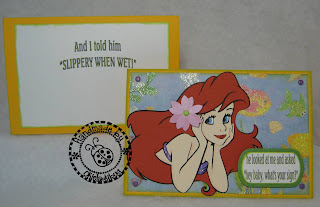 it was actually something I said to a man one time. But that is a whole notha story! *okie cracks up laughing remember that night*

But I do have to tell you I added "and right after that sign there is another sign.....DO NOT ENTER" It was actually funny since it was at a company Christmas party and the man was like a supervisor and I knew he was kidding around. He about died laughing when I answered him. I so enjoy people with a good sense of humor!

The background paper is one that I have no idea who it is made by. 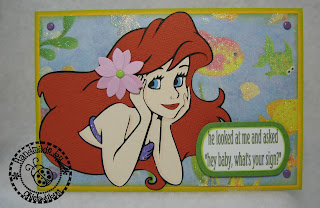 I got it for 10 cents a sheet last year at the LSS because it had a corner that had water damage. Which is a bit ironic since the paper is sea creatures! When I decided to do the card I did think of this paper for Ariel and I think it worked out pretty good.

Her flower is made with two of those wedding flowers from Michaels, the kind that come in a bucket. I added a green brad in the middle. I used purple brads in the corners.


The sentiments are computer generated in Microsoft Word. I used a 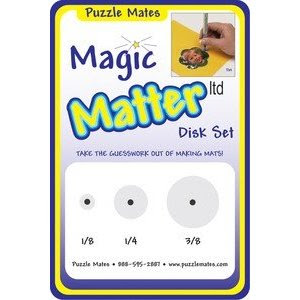 Stampin Up punch for the sentiment on the front and then used the Cozzule puzzle maker to make the mat. A wonderfully nice person from the Cricut message board sent me this little tool. She said she never used it and hoped I could. Well I have used it several times and thought I should post about it. I just use a pen in the hole in the center and the wheel glides around the edge of what I am wanting to matte. It does require hand cutting but it makes it nice when I don't have a larger punch for matting purposes.

I adhered Ariel directly to the card and then pop dotted 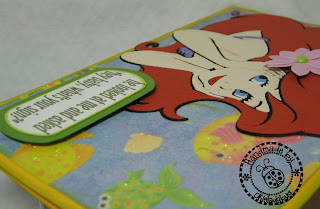 the flower in her hair and the sentiment. You can see a bit more of the sparkle of the paper in this picture, especially if you click it to enlarge.

I am not sure which princess will be tomorrow but I better get crackin with some ideas!!