A few years ago I took stuff for my groups at McCalls to make cards for Easter. They really loved it and I asked back in Novemeber if they wanted to make some Christmas cards. Everyone of them seemed excited about the prospect of being able to give someone a card they had made themselves.

I knew I would have to do card kits as we only have an hour for group and I have 6 in each group. I also scheduled two hours for group that week so we would have plenty of time to get the cards done. 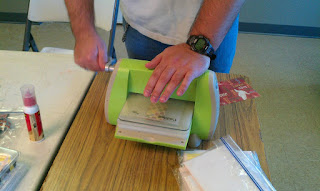 I think their favorite thing to do was to use the Cuttlebug and they used it on all 3 of the cards each of them made. I had one lady quickly become an expert and she helped the others get the "sandwich" right for embossing the paper. It was truly a wonderful thing having her be able to help so I could help the others get adhesive on the other pieces. Even all the guys liked using the Cuttlebug. 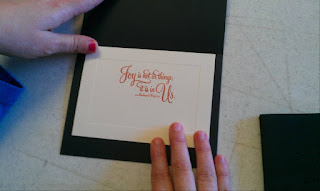 I had the stamps picked out for the sentiments and I showed them how to do the stamping on the cards. I did allow them to do their own stamping after I showed them. I had some extra pieces with me in case anyone messed up. I am terrible about dropping my stamp on my paper sometimes and messing it up so I wanted to be prepared. They did a wonderful job and not one of them dropped the stamp...showoff's! 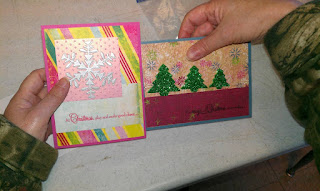 These were the first two cards they made. They used the Swiss Dots folder on the pink square behind the snowflake. The snowflake was also Cuttlebug but I did those in advance to save on time. On the background behind the glitter trees the piece was embossed using the Snowflake embossing folder. The trees were some foam stickers I have had for quite a while and never used. They really liked those. 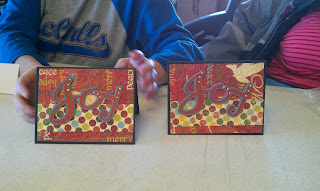 The last card we made took a little more time. I did add the Liquid Pearls to the word "Joy" beforehand because it would have taken too long to dry and I didn't want anyone being disappointed with a smears on their cards. This card was the favorite of all. I think it was the color combination they really liked. I know they embossed the paper on these but I can't remember what they used but I am thinking Dvine Swirls and Swiss Dots.

They were eager to let me take pictures of their cards and while they were making them and were a little disappointed when I told them I couldn't photograph their faces for confidentiality reasons and one even said "I'll sign one of those papers if you want to take a picture of my face". The paper they were talking about is the release of confidential information *okie laughs thinking about how smart these folks are and how many people in the open community just don't give them a chance*.

They are all excited now because I told them that since they did such a wonderful job we could do some cards for Valentine's day. They also want to do some birthday cards so they can have them on hand and we will probably do those more closer to summer time. They all worked so well together and helped each other out.

I know a lot of folks would probably say this activity was not therapeutic but I would disagree. Each individual worked on skills of following instructions, helping others, self-esteem, coping with frustration and discussed how by giving the cards to people in their support group will help them show appreciation. I try to be as creative with my therapy methods as I am with my crafting. It keeps my clients from getting bored and if it is something fun they are more likely to use the skills in the future.
Posted by okieladybug or okie_ladybug