Since there is so much that goes on at the parties I have decided to break it down into a few posts so ya'll don't get bored reading one horribly long post! 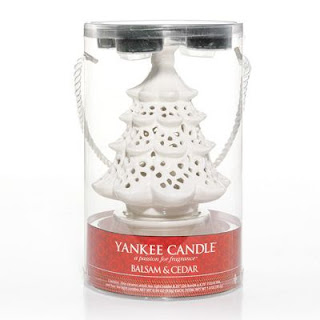 My guests started arriving on Wednesday December 5th. Karen came in from Florida that evening and after picking her up at the airport we went to my sisters where we would stay the night. My sister had made a nice pot of Fully Loaded Baked Potato soup which we so appreciated since we were both hungry and it was a rather chilly evening. Karen or I had not gotten our gifts for the Dirty Santa Game so we decided to do a little shopping. We hit Hobby Lobby and Khols to look for appropriate gifts for the party. Karen found a really nice Yankee Candle Christmas Tree candle burner at Khols but I was unable to find something I wanted for my gift. I had decided that I could make something before the party.  I did however find a great pair of shoes on clearance that were 80% off and were only$12! Karen has some kinda Khols coupon for 20% off her total purchase so she paid for the shoes and when I went to pay her for the shoes she said "they were like free!" because she also got some Khols cash. I think I really scored good there!

On Thursday morning Carmen came in from Houston and we had about 5 hours to kill before Helen was coming in from Tucson so of course that meant shopping! Oh and a wonderful lunch at Olive Garden. I think that has become a tradition since it seems we always have a meal at Olive Garden when we are doing airport shuttles.

I am quite sure Hobby Lobby is also a tradition since we went again! This time I found a nice tin Santa for my Dirty Santa gift that I really did want to win, but didn't. Carmen and I went into Ross Dress for Less while Karen took a nap in the van. Upon our return Karen said "well I'm glad I'm not a dog because someone would have called ASPCA on you guys for leaving me out here this long!". We weren't really gone that long, Karen is just a hard sleeper and it seemed like a long time to her! Carmen and I had to tell her about the woman in line at Ross Dress For Less. We were in line and Carmen said "oh we have to go around this area and get in line". We started going through the maze and this woman ran to cut in line in front of us. We were standing in line and Carmen and I were chit chatting then the woman pushed my buggy back into me and said "DO YOU KNOW YOU ARE HITTING MY LEG WITH YOUR BUGGY?". I looked at her calmly and with a very deadpan look on my face said "No I'm not. I haven't moved my buggy". She got huffy and yelled "YES YOU ARE!". Carmen then told her that we haven't moved the buggy and Carmen and the woman had a few words. By this time people were gawking a bit and I heard some people say "what's her problem", talking about that angry woman, not us. The woman threw her stuff in my buggy and left flustered. She also got a bit tangled in the straps for the line trying to make a beeline for the door. Karen was glad she didn't make the trip into Ross with us after all.

After the trip into Ross there was only about a hour before it was time to get Helen at the airport and I saw a PetSmart store and asked if they wanted to go in...oh wait, I gotta tell ya the conversation!


ME: Lucy needs a new collar, y'all wanna go in PetSmart?
CARMEN: They have a really good snack bar I like.
ME & KAREN: *odd look on our faces* Really?
CARMEN: Yeah it's really good.
ME & KAREN: Uhhhh...*giving each other sideways glances*

KAREN: Why the hell did we eat at Olive Garden when we could have eaten at PetSmart!
CARMEN: I guess I should have said they have a really good snack bar my dogs like.
ALL OF US: HAHAHAHAHA


Now let me tell ya, Carmen thought Karen and I were weird for thinking she ate at PetSmart but Karen and I were thinking Carmen was weird saying they had a snackbar she really liked. I mean if someone says that it in that manner wouldn't you think they ate there?? After finding a pretty pink snowflake collar for Lucy and checking out the birds, rats and snakes in the store it was about time to head off to the airport. 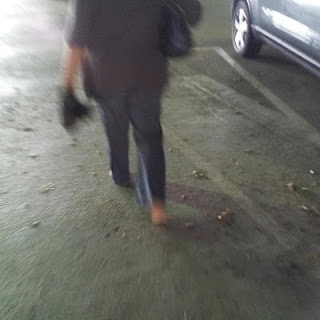 After parking and going into the airport and then deciding we could just pick Helen up at the arrivals area we went back to the van. My feet were hurting from the new shoes I got at Khols and I ended up walking back barefooted. I did get some odd looks from a group of business men but I told Karen and Carmen "well it is Oklahoma so it's not an uncommon thing to see an Indian running around barefooted" and they agreed and that the businessmen would be quite sure of what state they were in at the time.

We circled around the airport 3 times and Carmen finally jumping out of the van to find Helen and bring her to the van. We got Helen loaded in the van and were ready to head back to Ada. But first, we had to stop at Tuesday Morning! There really wasn't much there, I did grab a pack of paper that was pink with white polka dots and Helen got a few Tim Holtz items and Karen and Carmen left empty handed. We drove across the street for a quick run in at Joann's. By this time I think we were all tired and we didn't look around a whole lot. Helen grabbed a few things and off we went for my house. 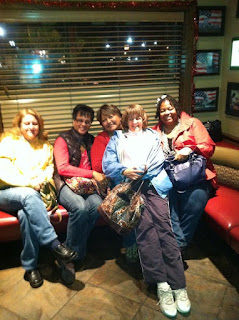 Upon arriving at my house we found Kimmy waiting patiently for us to show up. Luckily Shiane and Chuck were at home and they were able to keep Kimmy entertained. Shiane and Kimmy actually went to Walmart while waiting for us to get home. Since lunch was long gone and we were all a little hungry we went to Applebee's for a bite to eat. For some odd reason Kimmy felt it necessary to try and sit in my lap, something I am not quite accustom to, nor do I like very well to be honest, but I smiled just the same as a nice young man offered to take our picture.

The rest of the night was spent visiting and getting to know each other and discussing what all we needed to do the next day.

STAY TUNED FOR THE NEXT PARTY POST! *okie wonders if everyone who has read this long azz post understands why the posts need to be broken down into parts*.
Posted by okieladybug or okie_ladybug