After hitting some refreshments the guests were ready to once again start the games. The next game was Siamese Gift Wrap. There were 6 teams, with 2 people on each team. The teams were given the exactly amount of supplies so there could be no talk of cheating or unfairness! Each person hand to keep one hand behind their back during this process. 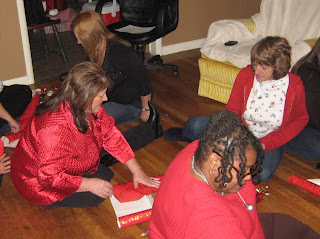 My poor sister and her teammate Kimmy were disqualified because I had to keep telling them to use only one hand. As you see here my sister is getting ready to put her hand on the box and Kimmy kept slipping and using her "arm", which was still disqualification due to not having her hand behind her back. 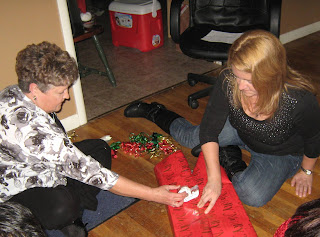 Linda and Karen did a great job of only using one hand and they worked rather well together. Linda was not amused with having to sit in the floor and made some comment about her age or something. I of course, do not go for that kinda crap because after all...she is only a few years older than me *okie laughs at the unusual knack she has of answering the question of "oh how old is so and so" and always answering with "oh they are my age" or "uh, just a few years older than me" and really believing these statements*. 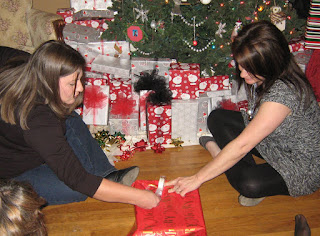 Nancy and Wendi communicated quietly and efficiently during their wrapping process and had wonderful taping of their gift. I think they were the ones that constantly maintained the rule of "one hand behind your back". 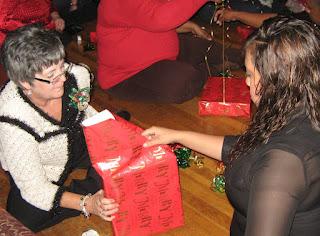 Robyn had the unfair advantage of having my daughter on her team. I was glad I was not the judge because I would have chosen their gift simply for the sharp clean edges and nicely tucked corners. My daughter has been an excellent gift wrapper since a very young age. Chuck did the judging and to be honest I don't remember which one he chose.

Our last game before Dirty Santa and the auction was Christmas Pictionary, which was more than amusing! 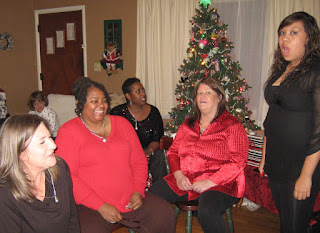 Notice the look on some of the faces in this picture and image those looks throughout the whole game. It was hilarious to see some of the drawings. I can't remember what was said when this picture was taken but evidently Nancy and Helen were amused while my sister Cheryl and daughter Shiane were rather shocked. 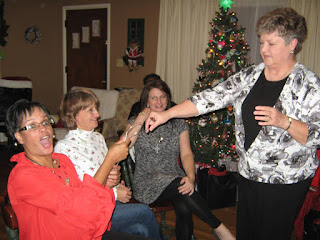 The next big shock came when it was this teams turn to draw and guess. They choose Linda to draw which got the response for me "REALLY? LINDA IS YOUR CHOICE?" and that sent me into fits of laughter. Linda often tells me "I can't even draw a decent stick person" so of course that choice would amuse me! However, Linda was not amused with my comment *okie giggles about getting a good little jab in on Linda, who is always such a good sport*. Well once I said that Linda promptly took of her necklace (guests were not allowed to say cuss words) handed it to Carmen as she said "F*CK YOU SHIRLEY!" I am so glad I had the camera ready at just that right moment to catch this on film! 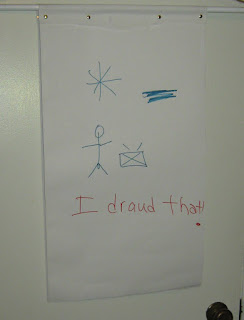 I didn't get a picture of Karen drawing but I did get a picture of her finished product! One of her phrases was "Little Drummer Boy". She drew a stick person with appendage in a particular place to show it was a boy and then next to it was a drum. I think we all laughed until we cried on that one! Then she had to add "I draud that!" as she explained to everyone about us playing Quiddler and me trying to use the word draud, which by the way is not a word but when you have had enough margaritas it sounds like it should be! 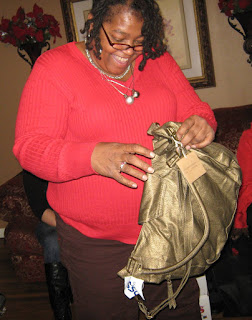 Dirty Santa was the last game before the auction, and is one game I look forward to since it is the only one I get to play.

The best picture I have from that game is when Helen stole a purse from Andrea, who had stole it from Robyn and Helen knew it was locked down and her evil little laugh just cracked us all up. I was so thrilled that Helen was able to make the party this year and hope she gets make more of them. I talk and text with her and we had met in person about 4 years ago when I was in Arizona for a few days and we had such a good time that one day we got spend together. She is talking about maybe coming for a week this summer which would be awesome. If she does I think Karen and Carmen might try to come in that same week as well! Now that would be a great week for sure!


After Dirty Santa it was time for the auction, which somehow I didn't get any pictures of. It is often very hard to be the hostess and photographer at the same time. Shiane did a great job trying to snap pictures here and there and got many shots that will be scrapbooked later. I try to keep the auction even as I made sure that there were 3 prizes per person. There were 3 prizes extra since I had a guest cancel. I asked who all had 3 prizes and then tried to take only bids from those who had 2 prizes to keep things even. I had one guest get perturbed because I wouldn't take her bid and even went outside later on and complained to someone about it. 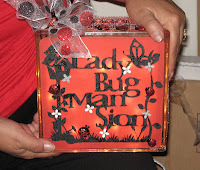 To end the night I go a few hostess gifts. I wasn't able to get pictures of all of them, too many refreshments effects one's ability to remember to photograph wonderful things, but my daughter did get a snapshot of this most beautiful light up glass block that Robyn made for me. I haven't found the perfect place for it yet but I am thinking on the shelf under my TV in the craftroom so I can always see it!

So now I finally come to the end of the Christmas Party posts. I hope you guys can all understand the fun we have and how much I enjoy putting this party on for my friends. I have already started planning 2013's party so I can get it out of the way because in 2014 it will be the 10th annual party and it will have to be bigger and better than anything I have ever done to commemorate such a monumental event!

Oh I will be posting pictures of the auction prizes over the next few days. I have those in draft mode so it won't take me as long to write up posts.
Posted by okieladybug or okie_ladybug