A few years back Stampin Up had some little metal tins in their clearance section and my friend Linda and I were so excited because we thought we could use them as tins for greeting cards. What we didn't realize was the corners were rounded and that made it impossible for A2 size cards to fit in their and we were stuck with the tins. I have used a few for different projects but this year I used 6 to make these nice little candy recipe tins as prizes for the party. 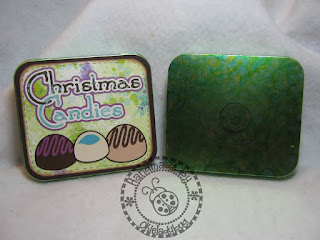 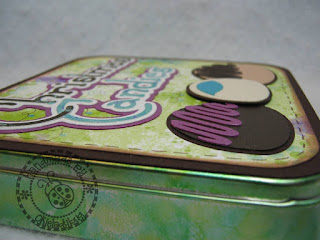 Alcohol Inks were used to color the metal tin. Only the top of the tin lid was decorated with paper. The title on the tin was cut with MTC and I was glad I was able to easily add more than one shadow layer. The candies were images from the internet that I did a pixel trace on and cut with MTC. I cut the candies out of Mica and Bazzil Bling papers to give them a richer look which might not show up well in the picture.

Each tin had a total of 12 candy recipes, all of which I have tried and are my favorites. I did choose the easiest of recipes that I use since I  know some folks aren't candy makers and like to keep things simple. 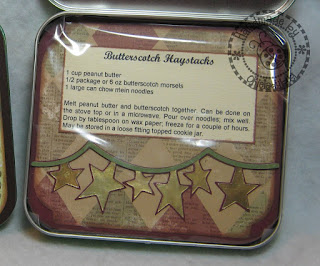 I know folks are always worried about messing up recipe cards so I included a little plastic sleeve in each tin so the receiver can put the card they are using in the sleeve for protection. I am terrible about making a mess when I am cooking so I know I would appreciate such a gesture. Of course I would appreciate a gesture of never having to cook again a day in my life HA HA HA. 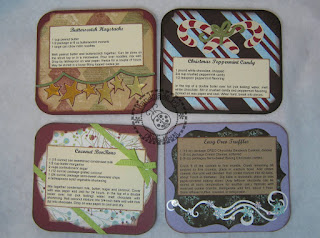 I tried to decorate each recipe according to the theme of the candy, some of them were kinda hard to do such as the Butterscotch Haystacks and Coconut Bonbons. The candy canes were from a cricut cartridge, at least I think they were and the bow on them actually was a bow from a present cut on one of the cartridges. I am quite sure the swirly snowflake border was from a Cricut cartridge. It took quite some time to get all the little snowflakes colored. I cut them all out of white mica and colored with my ProMarkers so I didn't have to cut them all out of different colors of paper. 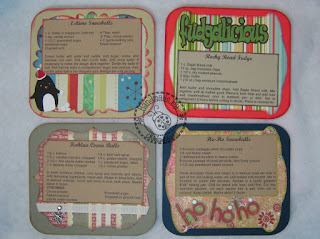 I did find that just adding some ribbon was a great embellishment and helped hurry up the process of getting cards done. Another HUGE help was my daughter! She put the majority of these together for me while I was at work. At the time she didn't have job and was more than glad to help. She did a wonderful job and has no idea how much appreciated her helping me. She even went through some of my supplies and added Glimmer Mist and other nice little touches she thought of all on her own. 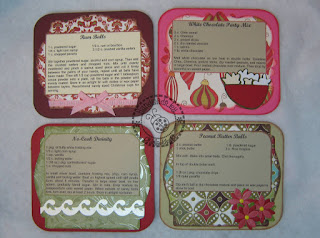 I used quite a few cuts from Lacy Labels for the mats on the cards and did have to do a little manipulating of them to make them fit the area I was wanting. I tried to mix them up and not use all the same mats but a few were repeated.

I think all the recipients of the candy tins really liked them. Carmen ended up with two somehow but she was nice enough to trade one with someone else. I am not sure what kinda of recipe things I might make for next year but it seems my guests do like those type of items for prizes so I guess I will have to come up with something!
Posted by okieladybug or okie_ladybug