Pen Charm, Personalized For Each Guest!

Sorry about the late post! I forgot to get it posted earlier.

This was a last minute idea and what seemed so simple took a lot longer than I thought to make...I know that happens to ya'll too so don't even try to pretend! 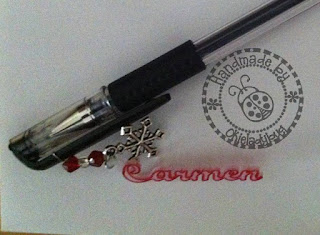 Two of the games at the party was going to require each guest use a pen. I had them do a Christmas Word Scramble and Holiday Movie Trivia. I picked up some gel pens at General Dollar and then when I got home with them I thought it would be nice to personalize the pens a little and add to their Swag Bags. I have never done any "dangles" as my friend Carmen calls them and when I was making them I tried to call her for help and she didn't answer so I know my little Pen Charm Dangles didn't turn out as nice as what Carmen makes, and she wasn't overly thrilled with my attempt but for a disposable pen I think it was fine.

The snowflake charms are ones I got off of eBay back in the summer. I planned on using them for cards and layouts and I think they worked well for the dangles. The beads were some I already and since the pens are disposable I didn't want to waste a bunch of money on something fancy. I wasn't sure what material to use so I just used some wire I had laying around *okie wonders if everyone has wire just laying around*. I left enough wire at the end so I could just use it to attach the dangle to the clip of the pen cap. 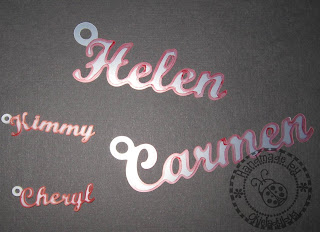 I used Make The Cut and my Cricut to cut the names. I can't remember the font I used but after getting the names all lined out I added a small circle with a hole in the middle and welded it to each name so I would have a way to add it to the dangle. You can see the size difference from the ones I cut and then after they were shrunk. I used the shrinky dink film that turns out white and then used my ProMarkers to go around the edges of the name so it would stand out a little better.

Everyone seemed to like their personalized pens and if I decide to do them again I will do a better job of researching the supplies I would need to make it a little classier.
Posted by okieladybug or okie_ladybug