I have had several comments about Tigger and hoping that he would appear in the Winnie the Pooh Series and of course I could not leave out Tigger! 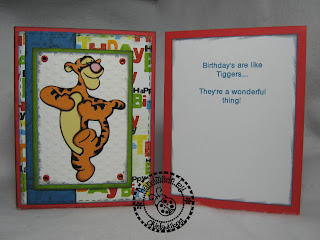 due to his stripes wanting to move around when gluing down. So if you do cut him this small I suggest start at the head stripes and work your way down. I seemed to have better luck with that method.

The patterned paper is Bo Bunny and cardstock is Prism and some other that I had in my stash.

The sentiment was generated in Hallmark Studio and says "Birthday's are like Tiggers....They're a wonderful thing!" Which I thought was pretty clever since I couldn't find a direct quote from Tigger concerning birthdays. 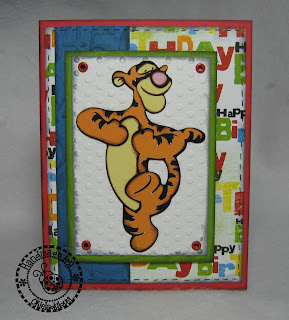 some red eyelets in the corners. I also used the Numbers Cuttlebug folder on the blue strip of paper. You can't really see it too well but it does look nice in person.

I do have to share a little story about my daughter and this card. When my daughter saw the card she started saying "T-I-double-guh-err" and then started singing "Tiggers are wonderful things. Their heads are made of rubber, their tails are made of springs ". I asked her how she knew so much about Tigger and she said "I have the movie Mom!!" and then proceeded to tell me I got it for her which I do not remember but if she says I did then I am sure I did. I just don't remember her watching Winnie the Pooh. Now all the other Disney movies yes...and I can still talk and sing along with quite a few of them. I guess my friend DCDoll is right, she texted me not long ago and told me I suffer from CRS! *okie wonders if everyone knows that means okie has the affliction of 'can't remember shit'*.

Tomorrow will round out the series since I ready to move on to something else. I had planned to do some of the other characters but I need a little break for Pooh and his friends for a little while. Be sure to check back tomorrow for my last card in the Winnie the Pooh series!
Posted by okieladybug or okie_ladybug