There has been a recent revival of interest on my Cuttlebug A2 folder storage! I have had several emails asking about 5x7 folders. I think it was back in January when I did the .cut files for the 5x7 folders at someone's request, but I never cut them because I didn't have any of the folders and therefore I didn't put them on my blog. 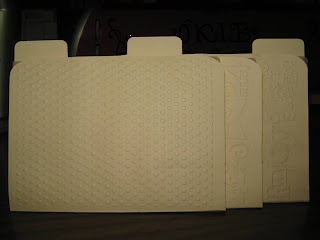 asking about the .cut file I thought I would get it posted. The score lines are included and they are done just like the A2 size ones so you can refer to that post if you need to.

There are two different files, both require the Expressions to cut due to the size of the folder.
- CB 5x7 folders Plantin
-CB 5x7 folders George

Each has the mats labeled and there are graduated tabs on the folders. There is also a divider included if you would like to cut one of those.

If you want to emboss the fronts be very careful. I was not able to use 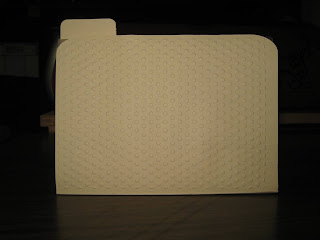 the 2 B plates to do so since the folder is larger than the A2 and the back of the storage folder has to go through at the same time. The combination I used was white plate, C plate, folder with storage folder loaded, 2 chipboard shims. Of course the shims will depend on the thickness of your chipboard.

Hope you guys can use this for your own storage.
Posted by okieladybug or okie_ladybug