And the final Winnie the Pooh series card....

I am ending the series with another Tigger card. I guess I never knew he was so popular and seems to be the most favorite of Pooh's friends.

I just had to use Tigger's "redickerous" word for this card! 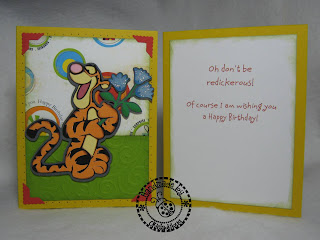 And my daughter laughed when she read this one, saying she forgot about him saying it until she read it.

Again I would say if you are going to do a Tigger this small I would start at the head part with the orange layer. I do have to say he still was not as difficult as that horrid Tinkerbell *okie wonders how much hate mail she will get for calling Tinkerbell horrid* to cut and put together. I did have to use a poky tool to get the eyes out a little bit, but even that wasn't hard. 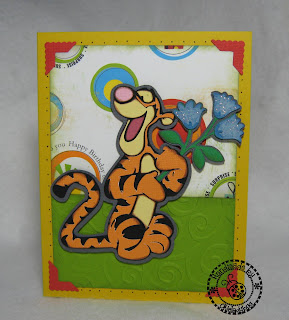 course you guys know my feelings about Stickles! I use Diamond the most because of how it looks when used on colored cardstock. I do have quite a few of the colors but I always grab the good ol' Diamond!

I did add the shadow layer to Tigger and the flowers on this one because I didn't want him to blend into the patterned paper too much and also I needed the extra thickness to help stabilize the cuts since I pop dotted them off the card.

The photo corners were made with an EK Success punch.

I made a few cuts along the cut line of Tigger's paws so I could slide the flower stem in there to make him look like he was holding the flowers, and it worked out pretty darn good!

If you would like to make your own Tigger cards then you can download the cut file or Gypsy file. Like the others in the Series both Tigger cards are in one file.

I hope you guys have enjoyed the cards from the Winnie the Pooh series! I will be starting a new series in a few days with.......*okie smiles big and then cracks up laughin* I am not gonna tell you! You will just have to come back and see what I use!
Posted by okieladybug or okie_ladybug