Piglet and the Red Balloon

I used Glossy Dimensions on the balloon to give it a shiny finish, obviously this wou 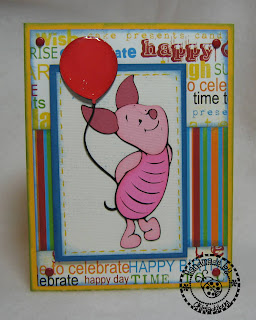 ld have been before the balloon that Piglet had taken to Eeyore for his birthday had busted *okie winks and nods head at her cleverness*.

The patterned paper is double sided Bo Bunny and since I only had one sheet *okie shudders at the thought of messing up the last sheet of paper during a project* I had to use it sparingly and wisely. I cut the mat at 4 x 5.25 inches and then cut 2.5 inches off, which is the striped paper. With the piece that was left I cut a .75 inch piece off and used it at the bottom and the other at the top *okie wonders if that makes sense and then just shrugs her shoulders and keeps on typing*. 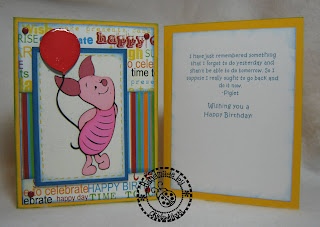 Eeyore for Eeyore's birthday but since I am not a Pooh fanatic *and okie means that in the best sense of the word* I didn't know where to look for such a thing.

I was finally able to found a sentiment that I thought was suitable for a birthday card featuring Piglet and believe you me *okie always wonders what 'believe you me' means but figures it has to emphasis importance* it was not an easy task!

So I figure you guys have figured out the pattern here of my posting and know what will be coming tomorrow! So until then....*okie tries to think of something clever to say but gives up and just smiles and waves* BYE!
Posted by okieladybug or okie_ladybug