We went, we shopped, we laughed!

But then again Linda, aka LGuild and I always do laugh! Sometimes we wonder if people think we are insane, but then we just figure we don't really care! *okie falls out chair laughin*. We weren't shopping for anything in particular this time, well other than checking to see if we could find the dorm fridge for my daughter that my Walmart was out of, so we did do a lot of browsing.

We stopped at a Walmart in Shawnee too see if they had the fridge I was looking for...they didn't. So off toward OKC we went.

First we went to Michaels. I was FINALLY able to use my $25 giftcard that my BFF Karen had given me for Christmas! Michaels didn't have a sale this week but there was a coupon for a 20% off total purchase 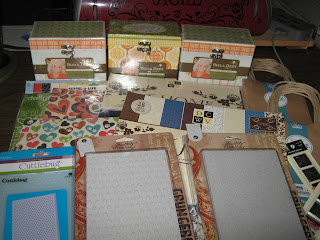 *okie would so rather have a sale*. I did get the DCWV At Home Glitter Stack and Cardstock Stack for less than half price on clearance. I also got some fabulous little boxes that are meant to be recipe boxes, but I am going to alter them and use them for card sets! Luckily Linda came along and pointed out that cards would fit in them! I also got a Martha Stewart punch on clearance for $4.99, it is one of those punch around the page ones and they didn't have the corner one so I am sure that is why it was on clearance, but I really like it for a border punch! I also picked up the large Dots Cuttlebug folder and used a 40% off coupon for it.

After Michael's we head to Ted's Escandido for lunch, the food and service was great! After that we went to Hobby Lobby and I picked up a pack of 12x12 mats, 12x24 mats and some Shrinky Dink plastic that I was able to use my 40% off coupon on. Then we headed to Tuesday Morning. I found a little package of paper that will be good for some layouts of my daughter and I was excited about finding Tim Holtz Grungeboard for $7.99, that was for two packs. I got the swirls and dots packages. They had quite a few of the cut out packages but I opted for the full sheets so I can cut myself.

At last we went to Big Lots. Guess what! I didn't find much there.....BUMMER! I did get two packs of glitter cardstock that was Heidi Swapps but it reminded me of some DCWV stacks. 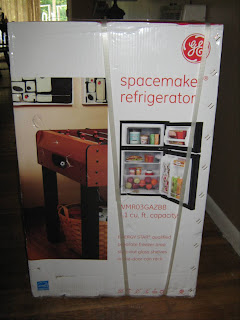 stop in there to see if they had the fridge I was hunting and sure enough...they had one left! We loaded it up in the cart quickly! Okay I have to tell you about that little escapade. I got the fridge off the bottom shelf and I told Linda that I thought we could lift it in the cart but then I added "but I might fart trying to lift it in the cart!" Now remember we had Mexican for lunch! Well that sent us into fits of laughter!! So much laughter that I didn't have to worry about farting lifting the box!! *okie blushes...then falls out chair laughing* We lifted the box and the cart went rolling. Linda had to bump the cart next to the shelving so it wouldn't roll. Finally we got it loaded checked out and went and got it in the van.

We stopped at another Big Lots on the way home, still nothing much good although I did get a few packages of some Making Memories metal embellies that I like.

You know, sometimes you just have to be there ... to really understand how hilarious it was trying to load the fridge into the cart while laughing so hard! I was laughing so hard about Okie "backfiring" in Wal Mart that it didn't occur to me the cart would roll away when the box holding the fridge hit the front edge of the cart.

You should have seen us, trying to keep the fridge from hitting the floor while I tried to stop the cart with one foot and not fall down! I sure hope they didn't get it on their surveillance video! LOL!

Then we got stopped by an associate as we were leaving the store to show the receipt. (I think they thought we were trying to steal a refrigerator!)

We were still laughing so I suppose we looked suspicious. The associate asked us if we worked for Wal Mart or were some of those "secret shoppers" they send around!

Then she proceeded to give us some "insider" information about why we shouldn't buy food at Wal Mart. She cracked us both up!

Yesterday was fun. Now, how soon can we do it again???????
Posted by okieladybug or okie_ladybug