I have had this cart for sometime now and I haven't gotten to use it like I had planned. Of course I don't mean I had a bunch of wonderful plans for it, but rather I had wanted to use it more than just the once I have in the past.

Oh what is the cart? Hello Kitty Greetings! Yep that is my series of cards for a few days! I think Hello Kitty is so darn cute! I kept resisting it but then when I kept seeing what people were making with it I just had to get it. Well that probably over 6 months ago! *okie feels sorry for poor lil ol Hello Kitty that was stuck in the cart box for so long*. But now she is free!

For my first card I decided to use the airplane cut. 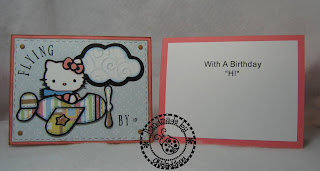 I am not sure I care for the patterns of papers I used on the card. I like the concept...just not the card so much. However, my daughter being the precious child she is, said she loves it! *okie wonders if her daughter says such things hoping okie will do daughter's laundry*

The stamping is done with a set of Just Rite stamps, but the inside of the card is computer generated.

I used the D'Vine Swirls Cuttlebug folder on the cloud 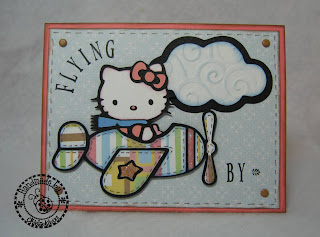 to give it some dimension and then lightly inked the edges and swirls. The patterned papers are from a DCWV Spring stack from a few years ago.

I do have to be honest and say after I put this one away for a little while and then went back and looked at it I did like it better than I did when I first finished it.

Hello Kitty isn't too bad to cut, some of the smaller parts can be tricky but using Tweezer Bee's are definitely a huge help!
Posted by okieladybug or okie_ladybug