This is my second card of the Winnie the Pooh series and it is also a Pooh card. The others I will be posting later this week will be the other characters from 100 acre woods.

I used Stampin Up! patterned paper on this one and I think the colors turned 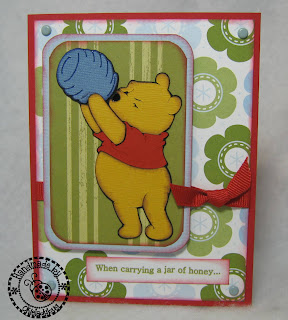 out rather well *okie so has problems with colors and wondering if they look right*. I used a corner rounder on the image mats and broke it in the process. Luckily I have a Corner Chomper on it's way to me so maybe I will stop breaking corner rounders! I used a Stampin Up! marker to go over the lines on the honey pot because I really didn't want to spend that much time trying to ink all those lines *okie can be so lazy sometimes*.

I did decide to go with a red base for the card since Pooh's shirt is red. I am not sure if you can see in the picture and might have to click and enlarge but I used some Glossy Dimensions on his nose.

When I first saw this image I was a little disturbed 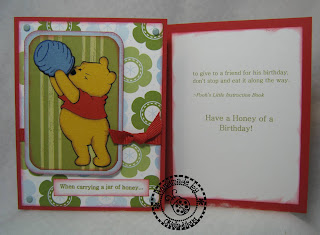 *okie actually thought...man Pooh looks pissed off!* but I realized later he is squinting looking for honey in the empty pot. That is what led me to use the sentiment "When carrying a jar of honey to give to a friend for his birthday don't stop and eat it along the way". I have to confess, I don't really know much about Pooh and the quotes I am using I found on the internet so if you are a big fan of Pooh *okie once again giggles and decides she is just TOO silly* and I have the quotes wrong please forgive me.

Now if you would like to duplicate the card from today and yesterday you can download the cut file that contains both cards. All the mats are labeled of course. I did use my paper cutter do do the mats but if you click on the mats on the preview page you can see the measurements as I don't remember them right off hand. OH yes.....the cut file!! Just click here ----> POOH BIRTHDAY CUT FILE.

And for tomorrow I will be posting a card using the character.......*okie decides to leave it a surprise*
Posted by okieladybug or okie_ladybug