So there are a lot of people who are estatic over the whole Cricut Design Space App for the Ipad and Iphone. I, however, am not one of them. Why? Because I am an Android girl. I owned an Iphone 3 for a period of time and didn't like it. I was an Android owner before that and then after. My last 3 phones have been Samsung Galaxy phones and I have to say I LOVE THEM! I currently own the Samsung Galaxy 5. So ya see the app for the I products just didn't phase me one bit.

But wait...they announced an app for an Android? *insert Minion voice here* WOOT??!! Cricut Design Space for Android?? Oh well that is nice but how am I suppose to see on my little phone screen on what I am trying to do? My tablet is a Kindle Fire, which if you didn't know runs it's own OS (ie operating system), and is not compatible with the Android App of Cricut Design Space, and I know this information to be true because I got it from a very reliable source who I am sure was getting a headache trying to explain to me why the app wouldn't work on a Kindle. I had been shopping for a new Kindle since mine is starting to try and poop out on me and have been researching which one I would like to have for over a week. In the mean time I saw that Walmart had a Samsung Galaxy Tab 3 lite in their BF ad and I was mildly interested just knowing it was Android. 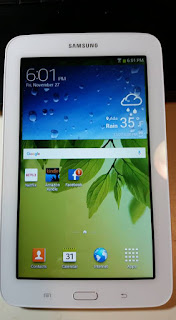 Thursday evening my cousins and I decided to head out to Walmart in Seminole *okie wonders if people have ever even heard of Seminole Oklahoma* to see if we could get a few things from the ad. The store was busy but was nothing like my Walmart in Ada on Black Friday. I didn't even see one fight in that store *okie remembers the fist fight and the cops being called over some Paula Deen cookware a few years ago*. People weren't even push each other out of the way. I digress, let me get back to our trip. We picked up a few things and I told my cousins I was going to see if they had any of the Samsung Tablets, thinking I could check it out more while we were in the very long line waiting to check out. I finally found out where the Samsung tablets were located and when I got to the spot there was a worker sitting on a pallet of water that was covered with a board protecting the Ipad and Samsung tablets that were left. I looked down and there were only 2 Samsung Tablets and she promptly handed me one when I asked and then behind me was a man that got the other one. I figured it must be fate.

The operation of the tablet is almost exactly like my phone so there isn't a difficult learning curve for me right now. The display is good, not HD, but still as good if not better than my Kindle Fire. It runs Netflix which I do use a lot on my Fire and I was able to download the Kindle Reader App and figure out how to work it easily enough. I don't think I am going to regret my jump from a Kindle Fire to a Samsung Tablet. Now whether or not I like Cricut Design Space on the Samsung Tablet will be a whole different experience. For those who don't know I hated the Gypsy so lets hope this goes a little better!
Posted by okieladybug or okie_ladybug