Sorry for the delay on this versus, I had some life stuff that had to be taken care of *okie figures cleaning house is considered life stuff* and didn't have time to sit down and type out the post.

I remember all the excitement at the launch of the Expression 2, which will now be referred to as the E2 for the remainder of this post, and how there were a lot of people upset after purchasing because they felt the "exclusive" machine they bought from HSN should  not have been sold again and I even made a POST about my thoughts on the matter. I was not one of the ones who jumped on the bandwagon to buy one because I was happy with my Expression and didn't want to put out the money for another machine. I did however end up with two E2's. The first of the E2's I acquired was one of the gifts on the Cricut Cruise and the other was won from the HSN contest and I had submitted a few layouts and they chose one of my layouts as a winner. 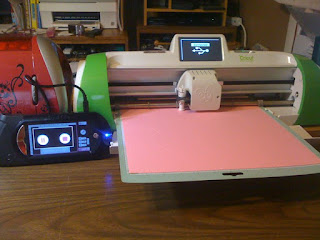 I liked the idea of the E2 and I did use it a few times but man oh man was it a pain! I couldn't use Design Studio with the E2 and of course the tiny screen on the machine was impossible for me to see to be able to do anything. The process that I had to use was as follows...
1. Design using Design Studio
2. Save the file
3. Close the file
4. Open the file and save as a Gypsy file
5. Upload the file to the Gypsy
6. Hook up the Gypsy to the E2 and cut my design.

I know Cricut Craftroom was available and yes it probably would have been less time consuming than using my Gypsy but I hated that program. For me it was glitchy and never ran smoothly and I only tried it a few times.

The cutting abilities of the E2 was comparable to the Expression from what I remember. I don't think it really cut any better and it didn't cut any worse. I know a lot of people who loved the E2...I was just okay with it.

With the Explore I still can't use Design Studio, which would be silly anyway since that program is now a dinosaur but I can't use the Explore directly with Make The Cut so I have the following process...
1. Design in MTC
2. Export design as SVG
3. Upload SVG into Design Space
4. Cut the design
So while there is a process for me to cut with the Explore it is a lot less time consuming than using the Gypsy or the glitchy Cricut Craftroom software. So far I haven't had any problems with using the Cricut Design Space with the method I am using and I love having the ability to design offline with MTC and then just using CDS for my cutting. I never use cartridges anymore and haven't for about 3 years now and my design abilities are only limited by my imagination and I love not having to depend on cartridges for images.