My second Cricut was the Expression. I didn't think I needed the Expression since I was completely happy with my baby bug and at the time I really couldn't afford to put the money out for an Expression. Back in the days of the Cricut Messageboard there were so many generous people and one of the members made it her goal to have me own an Expression machine and to keep things short about that in this post you can read about how I came to own the Expression >HERE<. 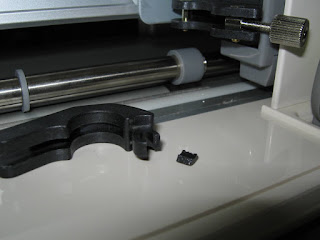 Anyway the purpose of this post is for me to think about how the Explore compares to the Expression. First off I have to say that the Explore does seem to be better built than the first Expression machines. The first one I had wouldn't cut nice scallops and I actually ended up going through about 3 machines before I got one that would cut some scallop circles half way decent. Another thing that happened with the first Expression I had was that it BROKE and I do mean BROKE. A replacement was quickly sent and I was back in business. 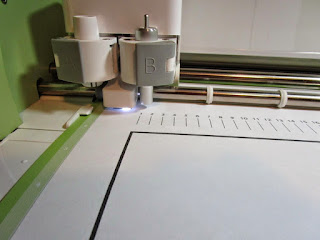 I never knew what all the buttons were for on the Cricut machines since I never used them without either using Design Studio or Make the Cut. I did try one time...it was a disaster. I do like the sleek design of the Explore better than the Expression and it doesn't seem to be as large, well as tall anyway and there aren't all those unnecessary buttons, well unnecessary to me anyway.

The cuts between the machines are non comparable as there were many things the Expression seemed to have difficulty cutting. There were many cardstocks and papers that the Expressions would shred when trying to cut and I have no idea what those techno head designers of the Explore did to make the machine cut so well but I'm just glad they did! I have only found one piece of cardstock that seemed to have problems and I might have actually had the settings wrong at the time.

Now about the settings...EXPLORE WINS! Although I am still not a fan of Cricut Design Space I do love the little feature of "custom" settings and the list of materials available in the program. With the Expression there were the dials that had to be set, blade depth, cutting speed, etc and it was a guessing game a lot of times because one time you would cut with a certain setting and it would be great then the next time there might be problems. The Explore is consistent with the cutting. I am beginning to think there are little beings in the machine that make sure it cuts correctly and cleanly every time because I can think of no other reason for the invariable cuts.

I honestly believe that if anyone liked the Expression they would LOVE the Explore. Well of course there will be those few disgruntled, for what ever reason, people who will not like the Explore but if they are honest with themselves I don't think they will find fault in the machine and it's cutting capability but only find fault with having problems with the software that has to be used with the Explore.

Oh and if ya haven't noticed I am going down the line of the machine's I've had over the years and comparing them to Explore so expect a few more versus posts because I owned a few more than just the baby bug and the Expression.

If you guys are really good and pay attention I might even have a little surprise at the end of my series of versus posts so PAY ATTENTION AND KEEP COMING BACK!
Posted by okieladybug or okie_ladybug