When Aunt Carolyn and Cousin Frank Come To Town...

There is no telling what I might hear, find or do! Aunt Carolyn and cousin Frank come to Ada every now and then and when they do we usually meet for lunch and go to Salvation Army and anywhere else we might think of to go. Today they came to town and we went to Salvation Army so I could drop some clothes off and we could look around. I found a headboard for $5 that I wanted for my scraproom. My Aunt Carolyn actually bought it for me, that was very nice of her!

We decided on lunch at Sante Fe Steakhouse, one of my favorites! Of course any place that has steak in the name has to be a favorite of mine since my life goal is to be a meatetarian! Yet, another post I must make sometime in the future to explain that one and some theories I have on that. First I will show you the headboard, then I will tell you the story about lunch...or the story that was told to me at lunch *okie scratches her head wondering which would be the correct phrasing and then decides she doesn't really care*. 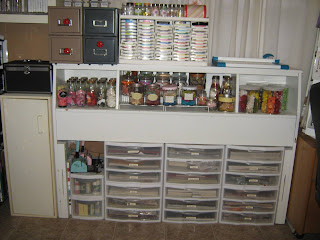 I use to have the drawer units scattered but now they are all together. I like that my inks can go on top of the headboard and that my flowers can fit on the shelves. I did get rid of some flowers though, I called my friend Wendi and told her "I got some chit I am going to throw away if you don't come get it!". She came and got the chit as soon as she got off work *okie smiles deviously at how she can so easily get someone else to take her chit*.

I think I need to make a new ink holder or at least another one maybe since I have some other inks and would like to have them all together. Hmmm, come to think of it I think I still have my boxes for the Stampin Up inks and I could probably use those for my various inks I have...oh boy, more re-organization!! 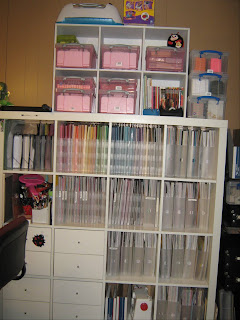 The shelf thing that I use to have my flowers in is now on top of my IKEA unit and now holds some of my Really Useful Boxes and my magazines. I have my handbooks and cartridge boxes slide into the shelf so they will still be easy to get to. I put my ribbon boxes at the end of the shelf. I was able to get my Your Story and Shrinky Dink Oven to fit on top of the shelf unit *okie doesn't believe in wasting any space*.

I would eventually like to get another IKEA unit and put it on the wall where the headboard and drawer units are. I don't care if it blocks the window, I just want more storage space!! I think  when I do get another unit I will get the 5x5 cube one. That should give me plenty of room for everything I have scattered and have it all nice and neat...*okie looks at her readers* OH SHUT UP!! I DON'T HAVE THAT MUCH CHIT! ONE MORE UNIT IS ALL I WILL EVER NEED!

Now back to our lunch. They were filling me in on my Aunt Joy's, one of my dad's sisters, funeral which was last month. I didn't attend, my mom once told me that two of my aunts didn't consider me to be daddy's kid since I was adopted. Aunt Joy was one of those aunts, so figured why go to the funeral if I wasn't family in the first place.

Anywho...So during the funeral service I guess my cousin Danny, Aunt Carolyn's oldest son, was sitting next to Frank and told Frank he needed to go outside. They went outside and Danny started complaining of chest pain and that his arm was feeling numb. Frank said "Danny told me 'maybe I just need some fresh air', AND THEN HE LIT A CIGARETTE!". Long story short...Danny was having a heart attack during the funeral! He was suppose to be a pall bearer, he didn't quite make it to do that honor and duty. Frank had to stand in for him. Aunt Carolyn said she didn't even know Danny had a heart attack until my niece asked her something about how Danny was and Aunt Carolyn asked what my niece meant by that. My niece informed my aunt that Danny had left for the hospital because he was having a heart attack. Of course to hear Frank and Aunt Carolyn telling this story I was cracking up laughing and told them "this is some great script for a sitcom!" Aunt Carolyn said she couldn't believe they didn't tell her and my uncle, my cousin Frank told her "Mom! We didn't want to interrupt ya'lls mourning!" to which Aunt Carolyn replied "well it sure interrupted my evening!" and we all started laughing at that point! Oh I guess I should tell you that Danny had surgery and is doing well now.

So that is the story for today! My family can be so exciting at times *okie cracks up laughing remembering the animation and facial expressions displayed by Aunt Carolyn and Cousin Frank while they told the story and how she loves her family for always finding humor in even the most terrifying times*.
Posted by okieladybug or okie_ladybug